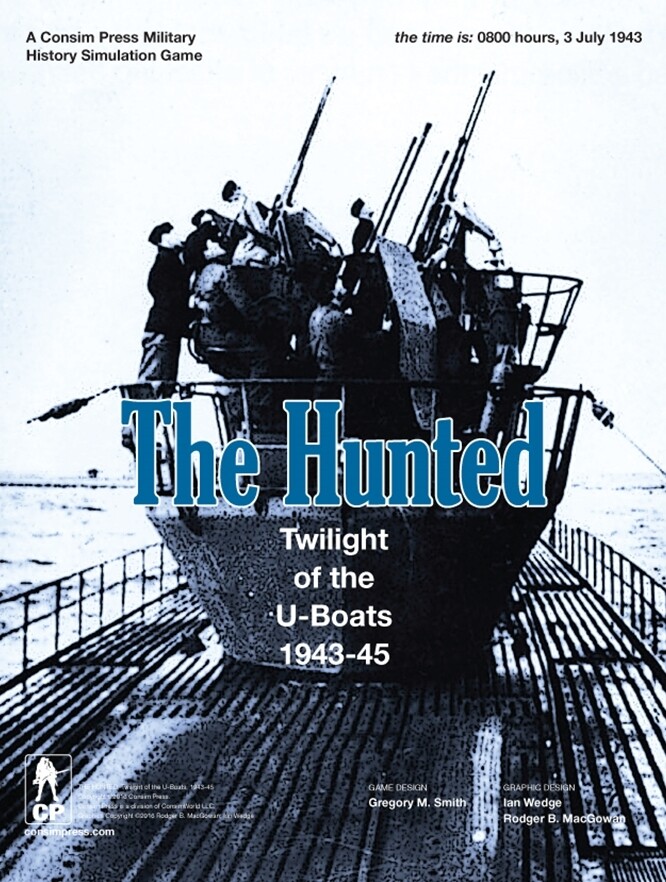 "No option but to fight on." — Grossadmiral Karl Doenitz

The Hunted is a solitaire tactical level game placing you in command of a German U-Boat during WWII. This is the long-anticipated sequel to the award-winning, multiple-print edition release The Hunters, and picks up the action where The Hunters left off. You command one of many U-Boat models available starting in 1943 and look to successfully complete U-Boat operations until the end of the war. Not only is this a standalone game, but fans of The Hunters will enjoy having the capability to easily combine both games to span all of WWII and experience the career of a U-Boat commander from 1939 until 1945.

While your mission is to destroy as much Allied shipping and as many Capital ships as possible, players will find it extremely challenging to "go the distance" and survive the entire war. The second half of the war has not been sugar coated; the brutal aspects facing U-boat commanders in the final phases of the war make surviving your attack difficult at best. True to history, your challenge is to accomplish what only a few could achieve — to make it to the conclusion, as happened historically.

The Hunted is purposely designed to deliver a brisk yet intensive gaming experience that forces many decisions upon you as you take command among the major German U-Boat models in service during WWII, and try to survive until the end of the war. All major U-Boat models are accounted for, with every level of detail, including period of service, armaments, crew make-up, damage capacity, and more. Fans of The Hunters will enjoy the same nail-biting game system, but fraught with many more challenges to withstand the advances the Allies have made in anti-submarine warfare. If you ultimately survive until 1945, you will surrender at port, having done your part on the front lines.

As U-Boat commander, you will be confronting many decisions during your patrol. To begin with, eleven German U-Boat models are profiled and available for you to choose from. Patrol zones reflect the period during the war at sea and will shift as the war progresses. All stages of the U-Boat campaign are represented; missions become increasingly more difficult as your adversary makes advances in anti-submarine warfare.

Conducting patrols are the heart of the system as you will be resolving encounters against individual ships, convoys, enemy submarines, and aircraft. Situations you face and decisions you make suddenly come in quick succession:

The major German U-Boat models are represented and accurately profiled for the patrols you will undertake during the latter stages of the war:

The game delivers an historical narrative as 300+ ship targets are uniquely identified (including tonnage) with their historical counterparts that were sunk during the war, including freighters, tankers, and American ships.

You were The Hunter, but now you are The Hunted. Can you bring your boat home in a tension-packed situation where every decision may be your last?