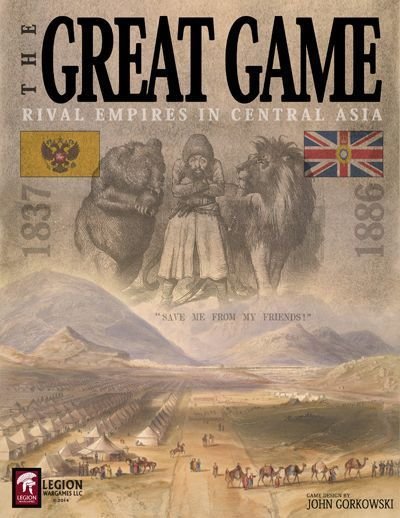 The Great Game recreates the 19th Century Anglo-Russian struggle for supremacy in Central Asia. In the actual contest, Tsarist Russia resented British expeditions into the Steppe Khanates while Victorian Britain feared that Russian entreaties to Persia and Afghanistan would jeopardize India's security. So the two imperial powers wove a complex tale of diplomatic intrigue, colonial conquest and proxy wars that spanned 50 years.

The Great Game is a card driven game (CDG), where players alternate moving officers (historical personalities) and troops across a point-to-point map of Central Asia in decade turns. Imperial powers strive to enlist vassal states such as Afghanistan and Bokhara into their camp through diplomacy or combat so an engaging game of move-counter move unfolds across the chessboard of Central Asia.

In the 19th Century, Victorian Britain and Tsarist Russia waged a daring struggle with frontier armies for control of Central Asia. Imperial officers leading local troops performed as scouts, spies, diplomats and generals through a series of intrigues, negotiations and proxy wars that spanned 50 years. This "Great Game" has since become legend.

Open warfare started in 1837 when a Russian Count convinced the Persian Shah to take Herat, Afghanistan by force. Meanwhile, another Russian officer, Vitkevich, rode for Kabul with a bounty of gifts to charm Dost Mohamed. This military-diplomatic pincer movement to capture Afghanistan threatened to give Russia control of the gates to India, the Khyber and Bolan Passes.

British Lieutenant Pottinger helped the Heratis repel the Russian-led Persians while British troops landed at the head of the Persian Gulf. Faced with defeat, Persia retreated ending the immediate threat to Afghanistan. However, because Kabul had received Vitkevich with full honors over British protests Calcutta saw no choice but "regime change" to protect the passes. In 1839, Britain's 15,000-strong Army of the Indus marched north through the Khyber Pass to quickly defeat the less disciplined Afghan army. At the same time, Colonel Stoddart made his way further north on a diplomatic mission to assure Bokhara that British troops would not invade that country. Meanwhile, Russian General Perovsky led 5,000 men south from Orenburg, a Russian Santa Fe, toward Khiva near the Aral Sea.

Disaster struck both imperial powers. Perovsky's men and camels first froze and then starved on the Kazakh Steppe. Rebellious mobs threatened the British in Kabul so Sir William McNaughten accepted Akbar's duplicitous offer of safe passage out of Afghanistan via the Bolan Pass. As the column marched, Jezail-armed sharpshooters mercilessly snipped at the 4,500 troops and 12,000 civilians ultimately finishing the job in a last stand at Gandamak. Awed by this defeat, the Emir of Bokhara hauled Stoddart from the dungeon and chopped off his head!

For the next 20 years, the imperial powers played the Great Game with caution while consolidating their gains and resolving other conflicts. Britain captured Punjab - well within its "sphere of influence." Russia did something similar by moving its line of frontier forts slowly south across the Kazakh Steppe. But the two did clash in the Crimean War. Persia took another swing at Herat. Imam Shamyl rose up against the Russians in the Caucuses while Indian sepoys rebelled against their British masters.

The interlude came to an end when restless Russian officers sought rapid promotion. In May 1865, a wily Russian General named Cherniaev didn't bother to ask his superiors for the permission he knew they would refuse before setting out with 1,900 men and 12 guns to capture the rich city of Tashkent garrisoned by 30,000 soldiers of Khokand. Under cover of darkness, Cherniaev concentrated his smaller force at a single point along Tashkent's 16 miles of outer wall to achieve a local advantage over the strung out defenders and win a resounding victory. Three years later, Kaufman lost only three men conquering Samarkand and then crushed the emir's army in a field battle that subordinated Bukhara to Russia. Britain watched with trepidation, lodged protests and contemplated making Afghanistan a protectorate to secure the passes, but ultimately decided on "masterful inactivity." Kaufman went on to capture Khiva with new German-made artillery in May 1873. Soon after, British Captain Burnaby stoked public fears of Russia with a detailed narrative of his travels across Central Asia, A Ride to Khiva.

Afghanistan again made the mistake of accepting a Russian diplomatic mission while refusing one from Britain. So 35,000 British-controlled troops marched north and won quick victories. The Afghans were surprised when Kaufman declined their request for 30,000 Russian reinforcements. Defeated and friendless, the Afghans submitted to a British residency in Kabul. Imperial setbacks soon followed. In 1879, the Turcomans repelled a Russian attack at Geok-Tepe near the Caspian Sea. In a bloody replay of 1841, the Afghans again attacked and slaughtered the British mission in Kabul. In retaliation, General Roberts stormed into the capital with a vengeance that left 100 Afghans swinging from the gallows. Fueled by hatred of the British, an estimated 60 thousand Afghans rebelled in December 1879. But this time the 6,500 British defenders had breech loading rifles, Gatling guns and enough food to last through the winter. When the shooting stopped, 3,000 Afghans had died to kill only 5 British.

The struggle for Afghanistan continued as various factions vied for control. In June 1880, Ayub Khan led an army of 8,000 toward Kandahar. About 2,500 British troops moved to block them at Maiwand. Shooting gave way to ferocious hand-to-hand combat as 5,000 Afghans and 1,000 British fell. The British retreated to Kandahar; Ayub pursued to besiege them. But when Ayub heard that Roberts was coming with 10,000 men he abandoned the siege, fled to the hills and pleaded for peace. His letter to Roberts claimed that, against his desire, the British had forced him to attack at Maiwand. Roberts ignored the plea, his 72nd Highlanders and 2nd Gurkhas cut down 600 of Ayub's men to restore British supremacy.

In 1881, Russians under Skobelev returned to Geok-Tepe. Sappers undermined the fort. A terrific explosion breached the wall; storming parties poured in to slaughter about 12,000 Turcomans in three days of vengence. Europe protested Skobelev's crimes so the Tsar exiled him to Minsk! Anxious to avoid Geok-Tepe's fate, Merv surrenderd when Russians approached in 1884.

The Russian conquest of Turcomans brought the British and Russian empires too close together. Both sides realized that with the previous safety zone now gone they needed an agreement to prevent bravado triggering war. After several years of haggling, the Anglo-Russian Afghan Boundary Commission of 1887 formally delineated Afghanistan's northern border to end the most dangerous phase of the Great Game.