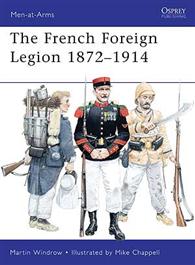 This volume covers the classic ‘Beau Geste’ period, of the French Foreign Legion when the corps was expanded during the most dynamic years of French imperial expansion. Legion battalions fought in the deserts and mountains of southern Algeria and Morocco, as well as in the jungles of North Vietnam, West Africa and Madagascar. Their varied uniforms and equipments for each period and theatre are illustrated and examined. Written by a leading expert on the French Foreign Legion, this is a colourful introduction to the period when the Legion forged their legendary fighting reputation.