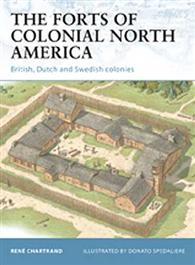 The Forts of Colonial North America

This book takes a detailed look at the fortifications of various types that were built from the times of the earliest British settlements in North America in the late 16th century until the end of the Seven Years’ War, when France ceded New France to Britain. It begins with a study of the forts built by colonists on Roanoke Island between 1585 and 1590, and the famous settlements in Jamestown (Virginia) from 1607. It moves on to cover the British settlements that followed in New England, Nova Scotia and other points on the North American coast, as well as the Dutch fortified settlements in what are now the states of New York, Connecticut and New Jersey, and the Swedish forts in Delaware between 1638 and 1655.