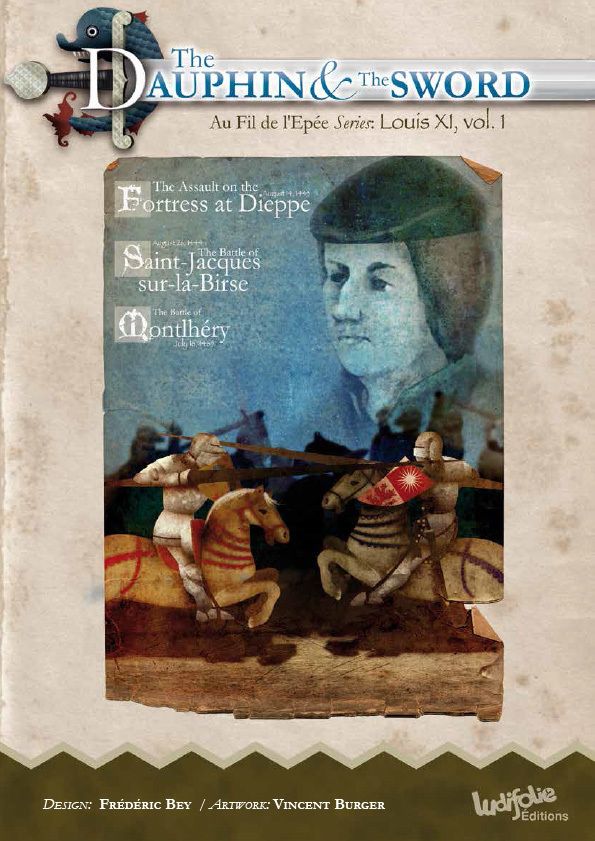 The Dauphin and the Sword

The Dauphin and the Sword is the 12th volume in Au Fil de l'Epée (By the Edge of the Sword) series and the first "Louis XI" volume. It covers three battles of Louis XI, when he still was Dauphin of France and finally King of France: Dieppe (1443), Saint-Jacques-sur-la-Brise (1444) et Montlhéry (1465).
Dieppe (1443): In 1435, the French captain Charles des Marets succeeded in taking the fortified port of Dieppe by stealth, with just a few hundred men. This audacious operation in the middle of Normandy dealt a huge blow to English pride, as Normandy was an English possession at that time (or at least was viewed as such). In the beginning of the year 1442 the English decided to recapture the town. They constructed a “very strong and big fort of wood, of large diameter”, whose sides were protected by a wide moat, on the hill called “Pollet” overlooking Dieppe from the east. This siege of Dieppe, by the English, gave the Dauphin Louis the opportunity to distinguish himself in combat for the first time...

Saint-Jacques-sur-la-Brise: The Swiss confederation had been in the throes of a civil war since 1439, with Zurich fighting against seven other cantons who had formed a Confederation. In 1442 Zurich made an alliance with Austria which, up until that time, had been an hereditary enemy. Unable to defeat the Confederation of Cantons, Frederic III of Habsburg asked for the military help of the king of France. Charles VII readily accepted, because he had just signed a truce with England. This was an opportunity to remove the bands of mercenaries and soldiers that he couldn’t pay from his kingdom - mercenaries that were living off the land and terrorizing the population. The king gave the command of these terrible “écorcheurs” (flayers of dead bodies) to his son, Louis. The Dauphin gathered around him one hundred forty companies of adventurers, who were followed by the usual horde of looters, women and even children of all nationalities. From 25,000 to 30,000 French, Gascons, Spanish, Scottish and English assembled in the Langres region in the beginning of August 1444. Among them were only 10,000 to 12,000 real soldiers, of whom around 40% were men at arms and 60% archers, commanded by some of the most sinister representatives of the military profession...

Montlhéry (1465): In March 1465, civil war erupted in the kingdom of France. Louis XI, having ascended the throne in 1461, payed the price for the political errors he made in the beginning of his reign. All the princes, the great nobles, the former counsellors of Charles VII that he dismissed, and even his own brother Charles of France, allied against him in the League of “Public weal”. At the end of spring in that year, they all converged on Paris - Bretons from the West, Burgundians from Picardy, the Duke of Bourbon and the Count of Armagnac from the Massif Central. Louis XI, after a disappointing campaign in Auvergne, decided to go north to battle the Burgundians before facing the Bretons. The Burgundians, under the command of Charles the Bold, Count of Charolais, first son of Duke Philippe the Good, crossed over Seine at Saint-Cloud and advanced to meet the royal army...