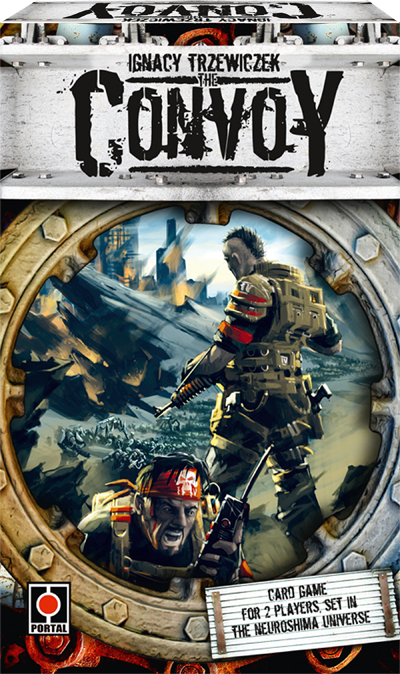 Convoy is a card game for two players, which is set in a post-apocalyptic world of Neuroshima, known for games such as Neuroshima Hex, 51st State, or The New Era, a world where humanity struggles with an army of machines.

Convoy is an asymmetric game – one player commands the convoy of powerful robots, which are moving towards New York. Its goal is to reach New York and turn it into ashes. The player has a deck of 35 cards: robots of Moloch (such as the Gauss Cannon, Clown, or Juggernaut), modules, attached to the robots (such as Network module, Kasparov module), and special cards (such as Push back, or Move). He plays those cards in the cities he passes while moving towards NY, trying to turn human settlements into dust and get ready for the final battle for New York …

The game lasts about 30 to 45 minutes, requires a hefty dose of combining, bluffing, predicting what cards the opponent may have on his hand, is full of twists and turns, and as usual in the case of our games – in a great way combines the story of the game with fine mechanics.