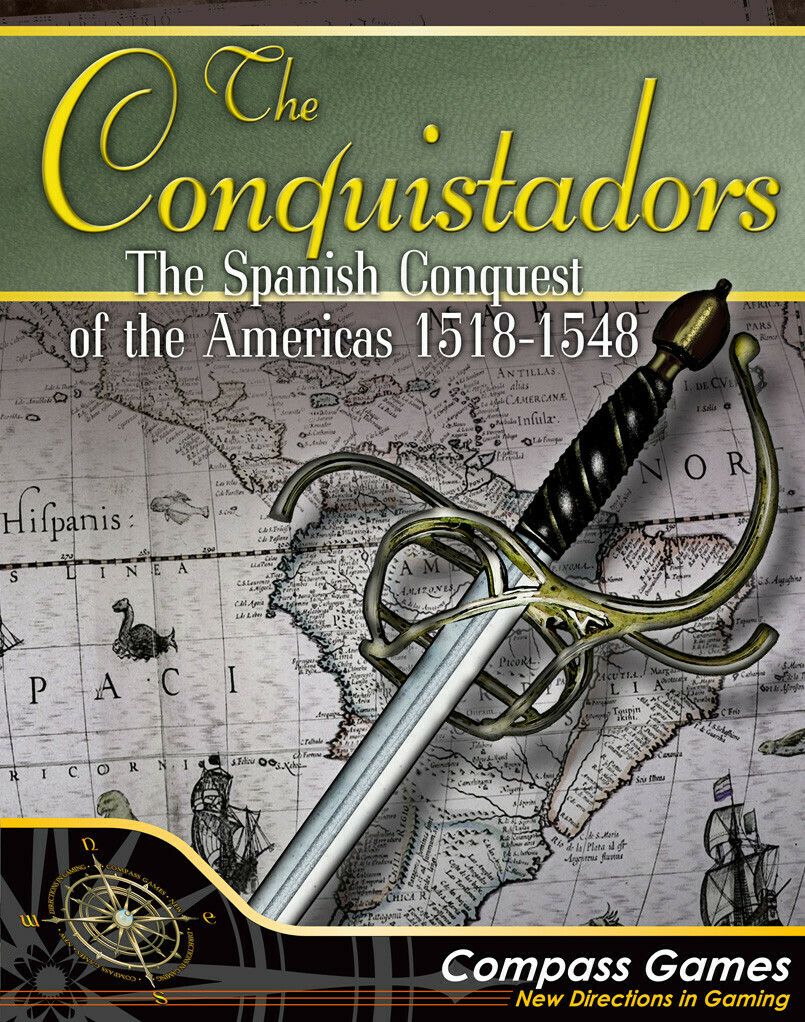 The Conquistadors: The Spanish Conquest Of The Americas, 1518-1548

In the half-century after Columbus, small bands of daring Spanish adventurers conquered Central and South America, destroying the huge armies of long-established native empires in the process. Some won great fortunes in gold, while many others only died an early death. These men were The Conquistadors. In this partly card-driven, partly procedural game —a brand-new design from Jon Southard — one to five players each control a group of conquistadors, trying to discover and loot the civilizations of the Americas and end up with the most gold and power.

A game of The Conquistadors begins with the outline of Central and South America as known in 1520. Your first task will be to seek out and discover the great Indian cities and empires -- which may appear in their historical locations, or in quite different places. Once you discover where the cities and empires are, it is time to gather gold. You might battle and plunder the Indians, or your best plan may be to attempt diplomacy and enlist them as allies -- especially if you have an Indian interpreter in your expedition. Like Francisco Pizarro, you might try a Sudden Shock Attack to capture a native king and extort a fat ransom. Always you must be sure to keep the Governor happy, or he may issue a warrant for your arrest. Beware of native uprisings, painted warriors, and poisoned darts around the next corner, and watch out for defection in your own ranks. If you fall behind in the race for gold, you might try to descend the Amazon or discover the Fountain of Youth. And when you are really in a tight place, perhaps you can appeal to Mano de Dios (the Hand of God) to bail you out.

The Conquistadors is playable by from 1 to 5 players, with an introductory Basic Game, a more involved Standard Game, and some optional rules. While the normal game system requires 2 or more players, solitaire play is enabled by a special solitaire module.