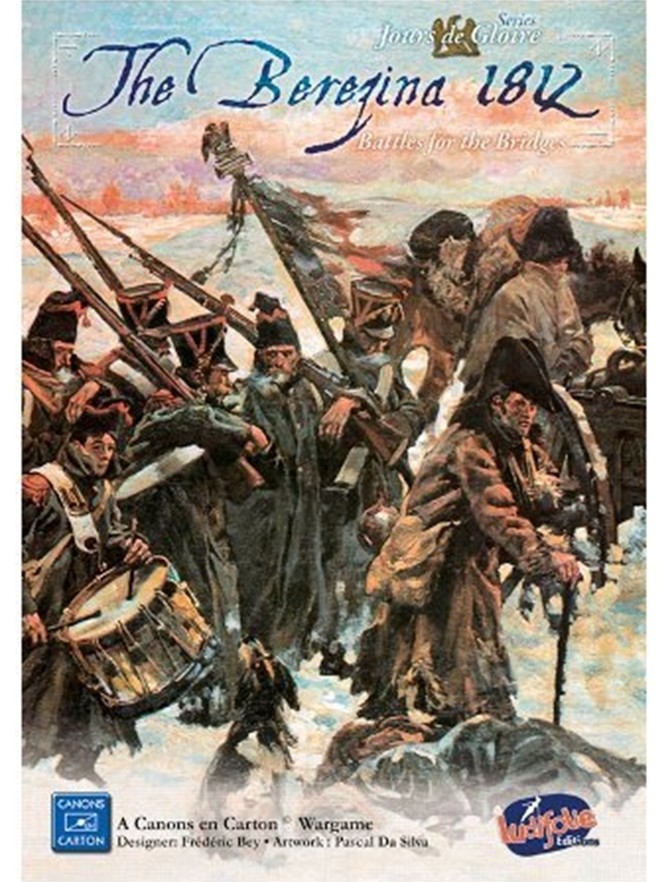 The Berezina 1812 is a complete game for the Jours de Gloire series. It covers the battles which unfolded between November 21 and 28, 1812, for control of the bridges needed for crossing the river. Napoléon, the Grande Armée and the immense masses of traînards (stragglers and hangers-on) had no other choice during their retreat across Poland than to cross the Berezina in force in order to escape the Russian armies of Generals Tchitchagov, Wittgenstein and Koutousov which were seeking to annihilate them.

When Napoléon departed Moscow with 100,000 men on October 19, 1812, he was still far from expecting that the retreat upon his bases would turn into a disaster. At the end of November, when the Grande Armée was approaching the Berezina, there remained to it only 35,000 combatants, accompanied by 50,000 traînards (unarmed soldiers, civilians, women and even children). At that same moment, Tchitchagov’s Russian Army of the Danube (23,000 men) and Wittgenstein’s Russian Army of the Dvina (26,000 men) were converging upon Borissov in an attempt to prevent the French from crossing the river. Koutousov, the Russian generalissimo, had sent ahead 12,000 men from his own army to share in the kill.

On November 21, the Russian General Lambert expelled Dombrowski’s Franco-Polish garrison from Borissov and seized control of the only bridge over the Berezina. On November 23, Oudinot recaptured Borissov but could not prevent the destruction of the bridge. Luckily, Corbineau’s cavalry discovered a ford at Stoudenka, 15 kilometers to the north, that was capable of accommodating one or more makeshift bridges. Upon his arrival on the 25th, Napoléon deceived the Russians as to his intentions. He carried out a variety of demonstrations around Borissov, while on the 25th and 26th Eblé’s pontoniers were constructing bridges on trestles which would allow the remains of the Grande Armée to cross the river. On November 26 through 29 the survivors crossed it while covering battles raged around them to protect the bridges. On the 27th, Partouneaux’s division (part of Victor’s rear guard) got lost, and finding itself isolated in the midst of the Russian forces, it had to surrender. The most important fighting took place on November 28. Victor, acting as rear guard, fought until late that night. On the morning of November 29, Napoléon ordered the bridges at Stoudenka destroyed, abandoning to their fate a large portion of the traînards on the east side of the river.

The Grande Armée, or rather the little that was left of it, was saved. It had achieved a fine tactical success in extricating itself from the trap at the Berezina, but it was henceforth too weak to be able to think of fighting further battles. Hardly 10,000 men would be left by mid-December, at the crossing of the Niemen River.

The Berezina 1812 places the players in the midst of numerous dilemmas. Will the French player be able to secure the bridges and manage the masses of traînards encumbering the roads, while repelling his adversary’s assaults? Will the Russian player succeed in coordinating the actions of his three armies and capturing Napoléon in his nets?