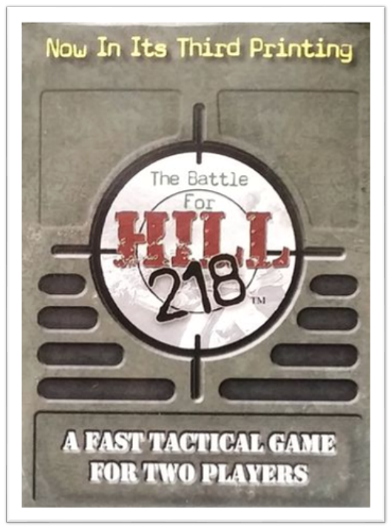 The Battle for Hill 218 is a fast paced tactical game for two players. Deploy your units, maintain your supply lines, and attack the enemy as you struggle for control of Hill 218. Whether blasting the enemy’s forces with artillery, keeping the enemy suppressed with heavy weapons or moving special forces into the enemy’s rear, the goal is simple - occupy the enemy base and you win.

In The Battle for Hill 218, players take turns placing cards that represent their units. These units must be able to draw supply from their base, except for Paratroopers which can be deployed anywhere. Once placed, units attack enemy units. Some units, like Tanks and Artillery, can destroy enemy units on their own. Most however require support from friendly units that have already been deployed. After attacking a unit remains in play, providing a line of supply back to the base as well as supporting other units when they attack.

Finally each player has a pair of one-use Airstrike cards that can be used instead of placing a unit to destroy any enemy unit in play.

Simple to learn – with a Go-like mechanism - yet possessing a depth of strategy that will keep you coming back for more, The Battle for Hill 218 will keep you playing game after game.