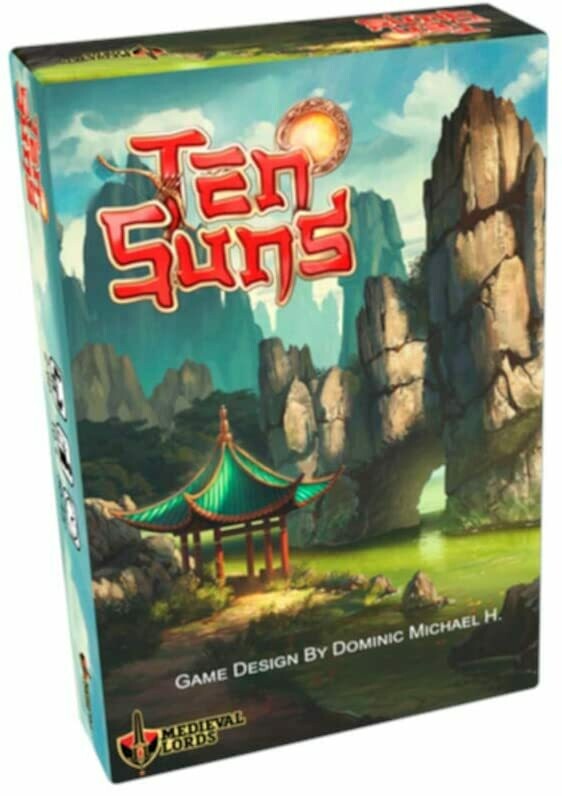 In the beginning, there was only you and other ancient Primordials. Then the dawning of the Gods arrived, and more celestial beings came into existence. It was then the Jade Emperor of the heavenly realm produced ten rebellious children who turned themselves into scorching suns in a bid to end the world. This was a good thing, for you drew solar power from the ten suns, making you invincible.

Alas, a mortal hero called Houyi appeared and began shooting the Suns down one by one with his golden bow. With the demise of each Sun, your power fades. You realize your seat of absolute power is at risk. In order to stay at the top, you must quickly form alliances with the Gods, build grand palaces in your name, influence lands to worship you and repel mythical monsters to gain prestige – all before the suns disappear forever! Welcome to Ten Suns!

Ten Suns is a ‘blind bidding’ game that revolves around the legendary archer from China, Houyi, who shot down 9 Suns and saved China from scorching heat. Players are Primordials who draw their energy from the 10 Suns. Before the Suns all disappear, players rush to gain enough prestige to secure a permanent position among the Gods. The game features famous locations in China like the Great Wall, Xi An, and many others. It also features other Gods and legends of ancient China, including Chang’E and the Jade Rabbit. Learn more about the ancient myths and legends of China as you play the game!