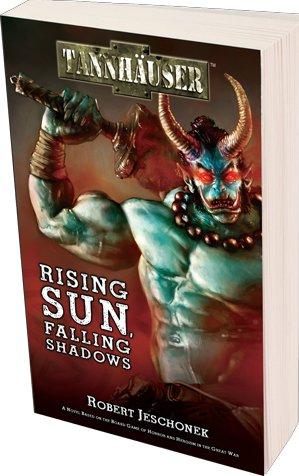 MacNeal’s hand shot up, and his commandos froze. He started to give the signal to form on Fireteam Alpha. But before he could finish the signal, he heard more gunfire from a different direction. This time, it was coming from nine o’clock, from the vicinity of Fireteam Charlie. MacNeal, who only moments ago had imagined he was taking a nature hike in Maine, switched smoothly into warrior mode.

Rising Sun, Falling Shadows is a novel by Robert Jeschonek and based in the war-torn alternate history of Tannhäuser. This gripping tale brings fan-favorite characters vividly to life, while drawing newcomers into a war-torn world where science and the supernatural clash to determine the fate of humanity.

In the midst of perpetual war, a far-eastern warrior sect with a shadowy agenda has set out toward the evergreen peninsula of Kamchatka. Can Union Major John McNeal and the elite soldiers of the 42nd Marines stop their sinister plot before it’s too late? And what terrible powers lie hidden in the verdant wilderness? The race is on to discover ancient secrets that could finally bring the Great War to its climactic end!

Robert T. Jeschonek is an award-winning writer whose fiction, comics, essays, articles, and podcasts have been published around the world. His characters include warlords, cannibals, serial killers, mad scientists, demented super-heroes, and robotic messiahs. He has published work with DC Comics, Simon & Schuster, and DAW Books.