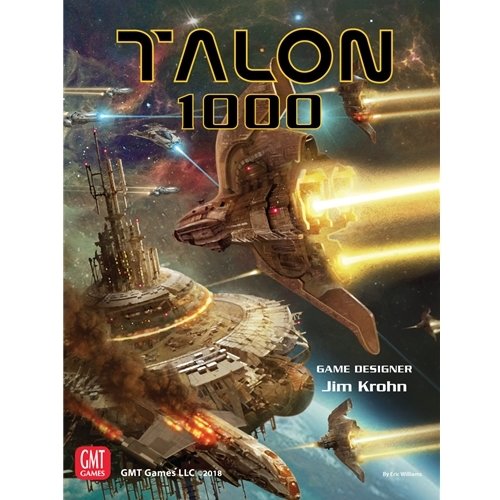 Lamination: - The ship counters in this expansion have improved lamination over the original game.

Solitaire System Added: - Although the Talon base game plays very well solitaire, a dedicated Solitaire System is being released as part of Talon 1000. Some of its features include:

Talon 1000 is a dependent expansion for the game Talon.Talon is a tactical game of space fleet combat between the Terran Confederation and the invading Talon Empire.It is a quick playing game with simple, but not simplistic rules that innovatively allows you to play large space fleet battles quickly.By keeping all of the information in front of you on the board, it enables you to have lots of choices and interesting decisions without the brain burn.

The expansion is called Talon 1000 because it adds over 1000 scenarios to the game of Talon.With 4 sheets of expansion counters, most of which have ships printed on both sides, the game comes with ~130 new ships.For comparison, the base game came with a total of 54 ships.Some of the new counters are increased numbers of the current ship types, but many of them are additional ship designs with different weapon load outs and configurations. This gives a wide array of point values which makes scenario balancing easy.

The 1000 scenarios come from the tables of fleets that are built from all these new counters.Both the Talon and the Terran have 10 unique fleets at the 300 point level, the 400 point level, the 500 point level, etc.All the fleets on each table are within 1 point of the table's total with no special rules or counter changes required.There are 10 of these tables of increasing points.To play a random scenario, the players can either choose a point level or roll a 10 sided die to arrive at one.Then they each randomly roll a die on that table to determine their fleet.With 100 different scenarios possible from each table, the 10 tables give the players 1000 unique scenarios.

The over 1000 scenarios part comes from all the additional things included in the expansion - base assaults, terrain, etc.

New ship types in the expansion:

All of the counters in Talon 1000 will be coated with improved lamination so that most (if not all) dry erase markers will work without residue.