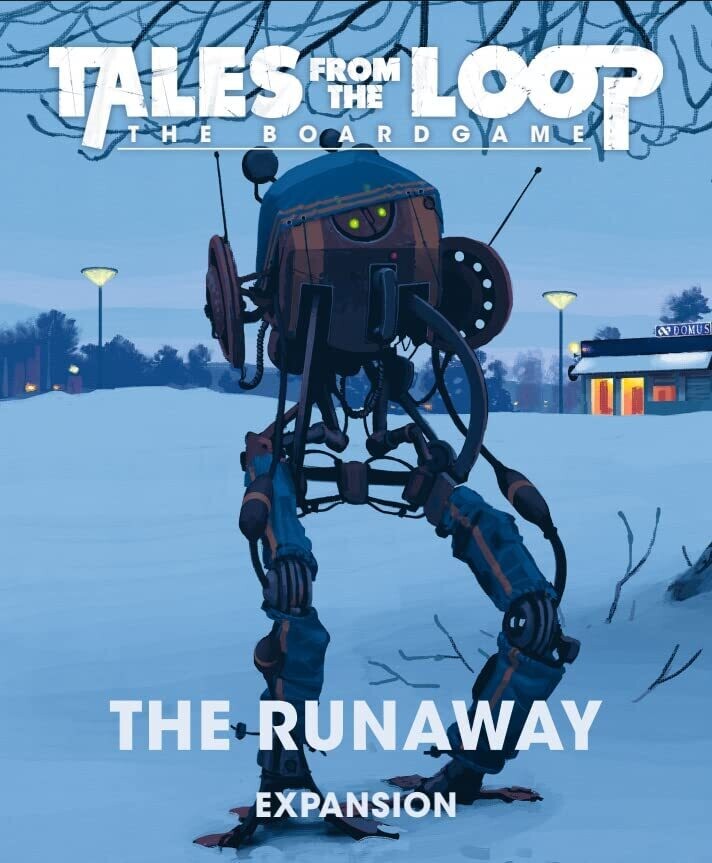 Tales From the Loop: The Board Game - The Runaway Scenario Pack

It stood under the oak tree in the yard – an oily, sad little tin can thing, its head partially entangled in some sort of canvas cover. It had discovered me and stood perfectly still, its head fixed in my direction. As I approached, it rocked nervously to and fro where it stood. It flinched, rustling its wiring, each time the snow crunched underneath my boots. Soon I was close, so close I could reach the cover hanging from one of its lenses. I leaned forward, managed to get hold of the canvas, and yanked it off. The optics underneath it quickly focused. It was marked FOA on the side, which meant this was an escapee from Munsö. Then our front door rattled, and with three quick bounds the robot was gone. The door opened and there, on the steps, stood my father.

Expand your Tales from the Loop – The Board Game experience with this runaway machine! For the past week black vans and agents in suits have been seen in the area around the Loop. Rumors have it that they are searching for a spy...

This expansion for Tales from the Loop – The Board Game contains a masterfully designed miniature of the Runaway machine as depicted in the art by Simon Stålenhag, as well as a completely new scenario featuring it, and all the cards and sheets needed to bring it into your game.

The miniature is supplied unpainted.