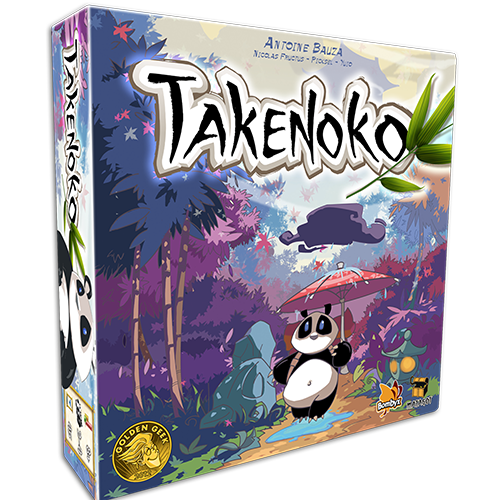 Can you grow bamboo across your plantation as a mischievous panda eats wherever he can? In every game of Takenoko, the players take the role of gardeners of the Nippon emperor caring for his Giant Panda and growing a bamboo plantation. Your mission: to farm and irrigate parcels of land growing green, yellow, and pink bamboo. Each turn, you’ll see what the weather brings your way and perform two actions: getting a new plot of land, digging irrigation channels, growing bamboo, feeding the panda, or drawing an objective card. At the end of the game, whichever player has earned the most points from his objectives wins!

A long time ago, the Emperor of China offered the Japanese Emperor a Giant Panda as a symbol of peace. Your delicate mission is to take care of the animal by growing a bamboo plantation. You will have to farm plots of land, irrigate them and grow bamboo there. But be careful with the sacred animal and its unhealthy appetite for the crunch shoots…

The player who grows the most bamboo by managing his or her plots the best while satisfying the delicate appetite of the panda will win the game.