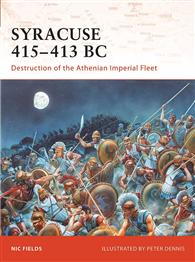 Syracuse 415-413 BC, Destruction of the Athenian Imperial Fleet

In the midsummer of 415 BC Athens launched a pre-emptive attack on Syracuse, urged on by the brilliant but reckless Athenian general Alcibiades, who claimed the Syracusans were providing the hostile Peloponnesian League with supplies. Moreover, if Athens could establish itself in Sicily then it would be in a commanding position for future aggression against Carthage. Possession of Syracuse would also allow the Athenians to dominate the Mediterranean. Nic Fields examines the foolhardy campaign in which Athens ignored the strategic implications of attacking a nation that was over 1,100 km away as two enormous armadas and 60,000 Athenians and their allies fought for two years against the only other democracy in the Greek world. Rare illustrations and breath-taking full-colour artwork complete the account of a disastrous campaign from which very few Athenians returned.