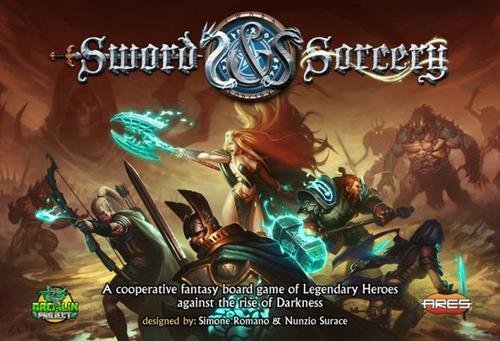 The Legend Begins! Play heroes of epic stature against the forces of evil.

Five heroes awoke from the dead and were made immortal to save the kingdom from the rise of darkness. In Sword & Sorcery - Immortal Souls, up to five players control one or more of these legendary characters brought back to life by powerful sorcery, to fight against the forces of evil, controlled by the game itself.

Heroes grow stronger during their story-driven quests. Along the battles, they acquire soul points that regenerate their souls, restoring their legendary status with multiple powers, magic and soul weapons, and powerful artifacts. An innovative A.I. system allows the control and management of enemies by the players, giving them intelligent behavior and creating interesting battles every time, with no Game Master required.

There is no player elimination - when a hero dies, he becomes a ghost soul, an ethereal form able to use its unique ghost shout against enemies, and then he can resurrect spending Soul points at the Gods altar.

In Sword & Sorcery, each player controls one or more heroes. Each hero is represented by a miniature, a hero sheet, a soul gem, and a number of power and equipment cards. Heroes may have one of two different classes, representing parallel destinies of the character - the result of his or her choices in the past life. The hero sheet is two-sided, to show both options, and each class has unique hero cards to use.

The forces of Evil are controlled by the A.I. system of the game. Each enemy has different fighting styles, multiple behaviors, weapons, and additional powers. Each enemy is described by a miniature, a tarot-sized Enemy scroll, and the Enemy card (to keep track of the defensive capabilities of the enemy, and the wounds on each figure).

Enemy activation is determined by Encounter cards, drawn after each hero turn. Activation can be based on the fighting styles of the monsters, their rank or other specific conditions, making each turn unique and unpredictable.

Sword & Sorcery features a sophisticated Combat and Magic System, based on two types of D10 custom dice. Each attack or defense value may be indicated as a fixed number ("automatic" hits - or parries), plus a number of dice to roll. The roll may generate additional hits or parries (shields), and the icons showing up on the dice (the "bolt" and "pentacle") can also be spent to activate additional weapon or armor effects.

Powers and skills are handled through an innovative cooldown mechanic. Most powers have a variable intensity, and the player can choose whether to activate the power at a low intensity, recovering it sooner, or with full strength, recovering it later.

No calculations and tables are needed. At the same time, the system offers great depth as you find the best way to use your skills and equipment to defeat the enemies in front of you.