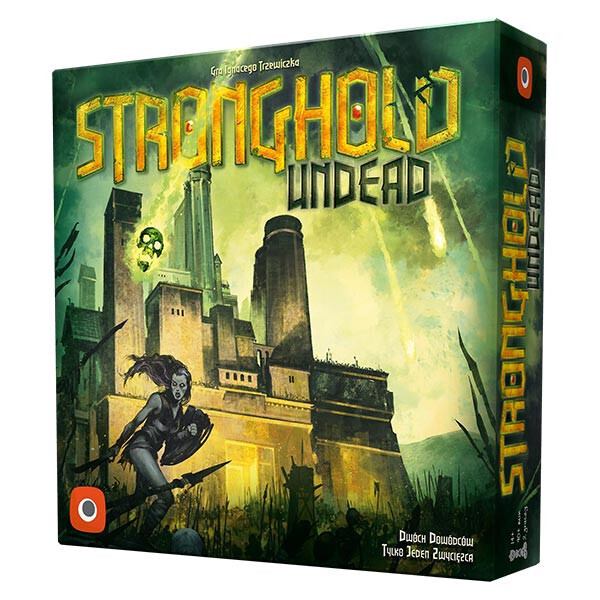 Fight the battle as epic as one in The Lord of the Rings! The legendary game by Ignacy Trzewiczek (Robinson: Crusoe, Detective) returns in a new, refreshed form! Stronghold: Undead is a strategic two-player game in which one of you will lead the forces of darkness to storm the Pearl Keep, and the other will try to defend it at all costs. On the huge board you will arrange units, place fortifications and cast spells. If any part of the wall is broken, the Invader wins, if the Defender holds for eight rounds - the Keep will be saved.

The storm is coming

The tireless forces of Arkhton march towards the Pearl Keep. An undead army of Vampires, Skeletons, and Phantoms, it will reach the fortress in a few days. The defenders prepare for a desperate battle, while the attackers are already celebrating their victory. An epic struggle will determine the outcome, as courage opposes tyranny, light opposes darkness, and arrogance opposes desperation. Which side are you on?

In Stronghold, each round has four phases. During the Supplies phase, you acquire tokens and cards which you will then spend on specific actions. During the Preparations phase, the Invader will spend Mana tokens to plan the assault. The more he uses, the more Hourglass tokens the Defender gets to prepare his defense. Now it's time for the Assault phase.

As the Invader, you send your troops only one way. They must capture the Ramparts, then eliminate the defenders and take over the Walls – and they cannot retreat. You have three types of units – Phantoms, Skeletons, and Vampires. When taking actions, you spend Mana tokens on spells. You have three Spell decks. Green Spell cards are helpful at the beginning of the game, Blue Spell cards are recommended for use in the mid-game, while Red Spell cards are best for the final stages of the game.

As the Defender, you won't defile yourself with black magic. You have Priests at your disposal, whose ability is to stop Phantoms and eliminate the Panic in own ranks. Within the walls of your Keep, there are Barracks, in which you will train new units, a Workshop, thanks to which you will strengthen the Walls and place Ballistae on the towers, or a Forge, in which you can smelt Cannons and forge ... Crosses to scare the enemy away more effectively.