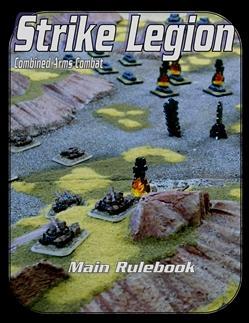 Command a combined arms ground force from any future you wish to imagine! Strike Legion combines simple game mechanics with a unique, integrated electronic warfare system and a respectable amount of unit detail and variation - and all without sacrificing playability.

Written in a progressive learning format with accompanying scenarios, players can easily and quickly command a company, battalion, or regiment on the tabletop. Dozens of vehicle and infantry units are provided for the enclosed scenarios, along with complete construction rules for creating your own forces. Design and field your own mix – or download pre-designed army lists representing forces and miniatures from popular figure manufacturers - of tanks, grav tanks, infantry, power armor, IFVs, VTOLs, artillery, mecha, aerospace fighters, cybertanks, orbital support and more in fast-paced, decisive actions that play out in an average of 1 to 3 hours.

Strike Legion scales combat at 1 piece = 1 vehicle, infantry team, or gun, with each turn representing about five minutes of real time. While Strike Legion is designed primarily for 1:285/1:300/6mm forces, players can easily use miniatures ranging from 2mm up to 15mm to fight their battles