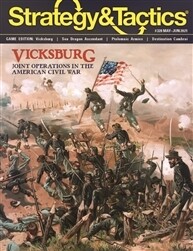 Strategy & Tactics: Vicksburg - The Assault on Stockade Redan May 1863

Vicksburg: The Assault on Stockade Redan (May 19th & 22nd 1863) is a two-player tactical wargame simulating the two Union assaults upon the Stockade Redan defensive position situated at the northeastern corner of the Vicksburg perimeter. The Union player must assault and capture the imposing Stockade Redan earthworks that overlook Graveyard Road leading into Vicksburg (unquestionably the most defensible position encompassing the city). The Confederate player must defend the Redan against the two historical assaults that attempted to take it (both failed with heavy casualties to the Union). Capturing the Redan does not automatically assure a Union victory. If and when the first or second Union assault succeeds, the players must then consult the Gettysburg Matrix to determine if the impending collapse of Vicksburg will prevent Robert E. Lee’s invasion of the North by compelling Jefferson Davis (who viewed Vicksburg as critical to the South’s survival) to refuse Lee’s risky plan to invade Pennsylvania, changing the course of the war.

Scale: Each game turn is equal to 5 to 10 minutes of real time. Each hex represents 12.5 yards (22.8 meters). Each unit-counter represents a company or regiment, depending on the unit type.