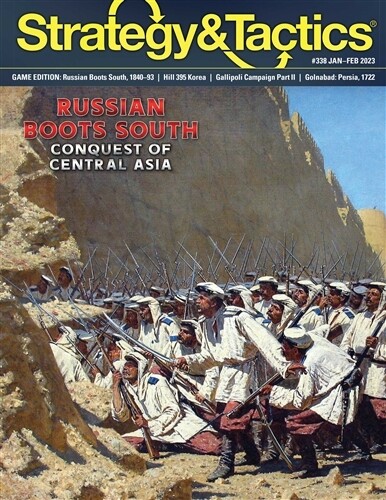 Russian Boots South: Conquest of Central Asia: The game system is based on the previously published S&T games: They Died with Their Boots On, Volumes 1 & 2, Julian, and Sepoy Mutiny. Russian Boots is a two-player wargame simulating the Russian conquest of Central Asia during the 1850s to 1890s. There are two opposing players: Russian Empire and Khanates. The Russian Empire player represents the theater command of an autocratic empire. The Khanate player represents the various independent kingdoms and tribes of the region, with the possibility of intervention from forces on the periphery. Victory conditions are asymmetrical, with the Russians trying to conquer Central Asia and the Khanates trying to prevent this. There are three scenarios, each representing a different situation. Each game turn (GT) represents from one to six years, depending on the pace of operations. Each hexagon on the map represents 80 to 90 kilometers (53 miles). Each Russian unit represents one or two battalion-sized grouping of companies or squadrons. Other units represent brigade or division-sized units, along with corresponding logistics, as well as groupings of tribesmen or other fighters ranging between 1000 to 5000 fighters. Generals represent key commanders, their staffs, and an elite guard.