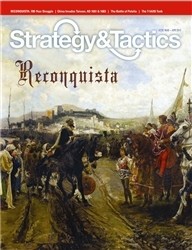 Reconquista is a strategic-level game simulating the Christian re-conquest of Iberia during the years 850 to 1250. The map shows the entire Iberian peninsula, with land areas representing territories and kingdoms. The game is primarily two-player, simulating the struggle for control of the peninsula between collective Christian kingdoms and the Muslim Moors, but it can also be adapted to a multi-player format as various realms rise and fall. The game includes all the major historic Christian and Muslim “nationalities” of the epoch (228 counters), such as Asturias-León, Castillians, Aragonese, Catalans, as well as different contingents of Muslim forces, such as the Andalusíes (Spanish Muslims) and the North Africans (Almohades, Almorávides).