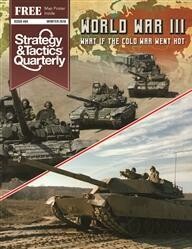 At the end of World War II, two superpowers emerged from the conflict: the United States and the Soviet Union. In the decades that followed, these two superpowers faced off in what became known as the Cold War. This issue analyzes the military aspects of that long struggle between the two powers. The approach is to analyze where World War III might have started and been fought in each of the decades between 1945 and 1991. The chapters include original maps, orders of battle, and photographs. It is written to be of value to newcomers as well as those who consider themselves experts. The prose is clear and free of jargon, but rich in detail and analysis.

This issue includes a 19" x 26" detailed map poster. The front provides a detailed list of potential hot spots around the globe and their implications on sparking a global conflict. The back is an info graphic of select nation’s military strengths in different regions of the world.