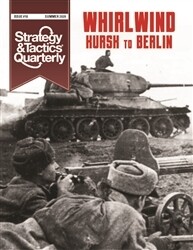 Whirlwind – The Soviet-German War 1943-1945: Stalingrad was the end of major German advances in the east, but not the end of the war. Despite massive losses in the first eighteen months of fighting, the Soviets were just reaching their peak strength, coupled with an increasing stream of weapons, supplies, and equipment from the western Allies. Massive offensives were undertaken across the front, breaking at first on the bulwark of German tactical and operational superiority. Over time the Soviet advantages grew while German resources shrank, and the offensives began to land telling blows.

John D. Burtt guides the reader through this vast story, chronicling not only the individual battles, but the evolution of the opposing armies. Detailed maps, orders of battle, and weapons descriptions support the narrative.