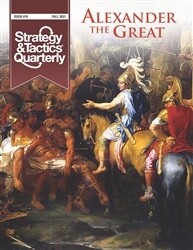 Alexander the Great: Few historical figures are better known than Alexander III (the Great) of Macedon, whose epic conquest of the Eastern Mediterranean world is the stuff of legend. With great talent comes great ambition, however, Alexander was driven to outdo his predecessors, driving his army to the point of mutiny. His ambition also caused him to be ruthless in extracting wealth and obedience from his subjects.