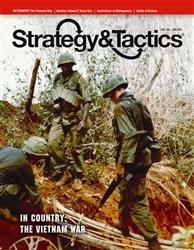 In Country: Vietnam 1965-75 is a simulation of several critical campaigns of the Vietnam War, 1965-75. This is a two-player game. One player controls the Communists, the other the Allied forces. The game has several scenarios (1965, 1968, 1970, 1972.) Each simulates a period of intense conventional warfare in which a critical decision might have been reached. It was during the periods of major offensive operations that there was the possibility to have altered the outcome of the war. While the emphasis of the game is on conventional operations, unconventional war also has its place; woe to the player who ignores it. The map shows the Republic of Vietnam, Cambodia and the adjoining regions of Laos and North Vietnam, as they were in 1965 to 1975. The game includes 560 pieces to simulate the entire war.