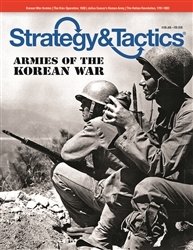 Armies of the Korean War: An analysis of the last-ditch UN stand around Pusan and the subsequent counteroffensive north to the Yalu River.

Korean War Battles is an operational-level simulation of three engagements in 1950: the holding action at the Pusan Perimeter (August – September), the invasion at Inchon and subsequent battle to retake Seoul (September), and the withdrawal from the area of the Chosin Reservoir (December). The games all two-player, but are easily adaptable for solitaire. The time and space scales vary from game to game, and units of maneuver are battalions, regiments and brigades, with occasional divisional-sized ones in some scenarios.