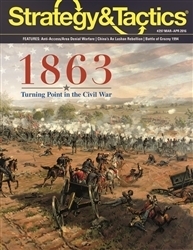 Turning Point in the Civil War

1863 is a two player wargame of a pivotal year in the American Civil War. 1863 saw the Union victories at Gettysburg in the east and Vicksburg in the west, and the Chattanooga-Chickamauga campaigns when the Confederates had the opportunity to win a decisive battle and potentially gain foreign recognition.