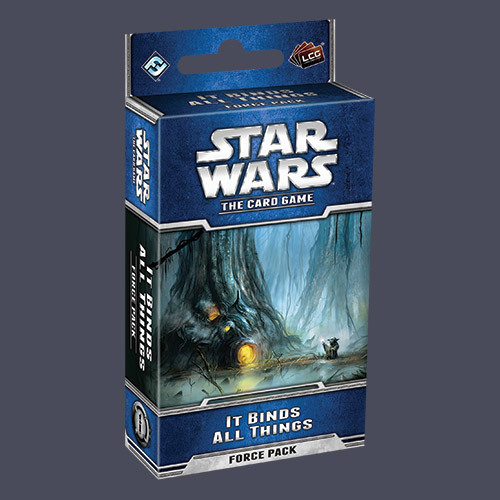 “One thing remains. Vader. You must confront Vader. Then, only then, a Jedi will you be. And confront him you will."

Darkness and Light is the final Force Pack in the Echoes of the Force cycle for Star Wars™: The Card Game, and it continues the cycle's progression into the mysteries of the Force with ten new objective sets (two copies each of five different sets). These objective sets put you in cockpit of an Imperial Navy fighter, offer the allure of a Sith cult, or allow you to impersonate a deity with C-3PO in exchange for some native support.

The Echoes of the Force cycle draws to a close, and each of the affiliations of Star Wars: The Card Game explore the new possibilities and tactics offered by these cards. Whether you work with Jedi to protect the innocent from the dark side, or you dive deep into the slimiest schemes within Jabba’s palace, you’ll find the tools you need to make exciting new decks and explore new strategies.

The Force holds the galaxy of Star Wars together, but only you can determine which side you will fight for: Darkness or Light?

Sixth Force Pack in the Echoes of the Force Cycle.