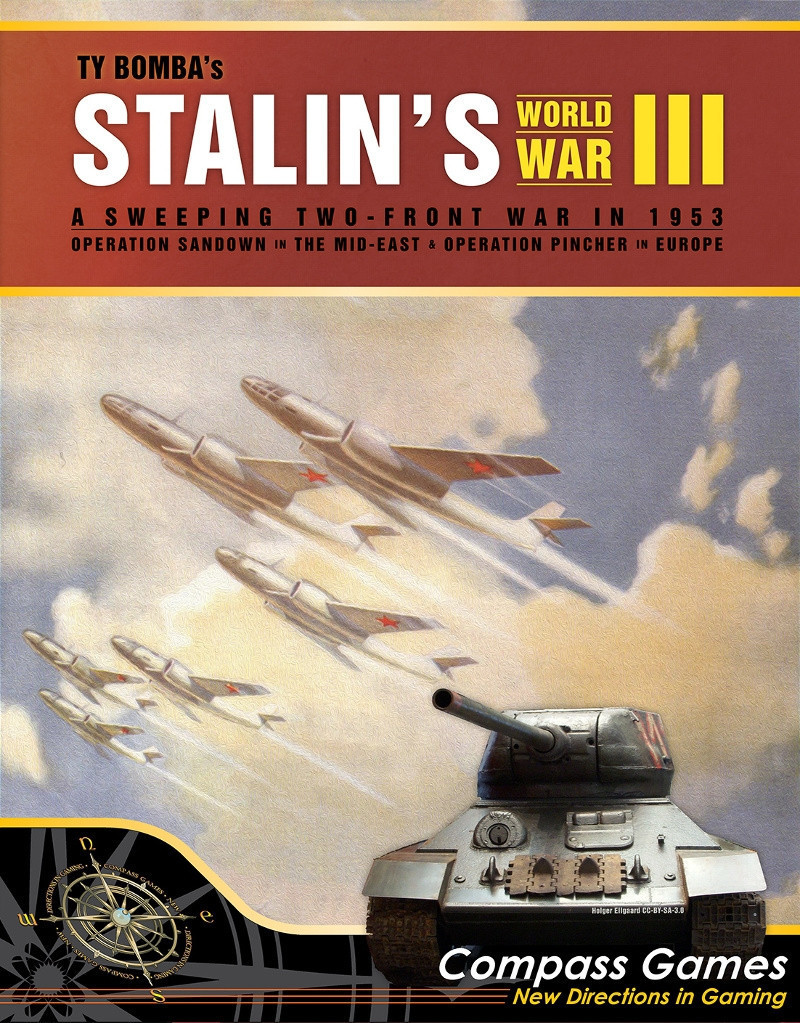 Stalin's World War III is a two game package: Volume 1 – Operation Pincher & The Soviet Offensive in Europe; Volume 2 – Operation Sandown & The Soviet Offensive in the Mid-East. This is an alternative history monster-size wargame, designed by Ty Bomba, intended to investigate the strategic parameters that would’ve been in place during the first 10 weeks of operations had that dictator lived long enough to put in motion one of his many plans to start a global conflict in 1953. Had he lived, the most likely start date would’ve been one coinciding with the signing of the Korean War armistice in July, in order to achieve maximum surprise. Each two-map volume can be played separately by one, two, three or four players, or they can both be combined into on Grand Campaign Scenario covering all four maps.

His goal in starting such a war on the continent would’ve been to blitz across Western Europe all the way to Rome and France’s Atlantic and Mediterranean coasts. He would thereby have succeeded in an even grander operation than that of the Germans in 1940 and, in so doing, certified himself as history’s greatest military commander. He would likely also have tried to overrun Yugoslavia and eliminated Tito (whom Stalin loathed). His goal in opening a front in the Mid-East would’ve been to blitz all the way to Suez and the Persian Gulf oilfields. He would thereby have succeeded in denying the US Air Force the bases needed from which to launch its planned strategic “air atomic” offensive into the USSR, while also deny the West the petroleum resources of the region.

There are rules for atomic bombs, but their use by the Communists is constrained by their still limited availability historically at that time, as well as by their lack of a fully dependable means to deliver them. On the US/UN/NATO side, the limitation is political. That is, the early 1950s marked the arrival of the anti-imperialist (a.k.a. “third world” or “nonaligned”) movement on the global media stage. So if the Americans try to win by using enough bombs to blow to bits Stalin’s horde, they do so much damage to the environmental and socio-political ecologies as to undo their victory in the strategic sense.

Volume 1’s twin-maps (34x33”) cover Europe from the East German-Polish border south to Belgrade and Sarajevo and west through Rome to France’s Atlantic and Mediterranean coasts. Each hexagon represents 20 miles (32.4 km). Volume 2’s twin-maps (34x44”) cover the Mid-East from Ankara in the northwest to Tehran in the northeast, and south from there to Kuwait City and Suez. Again, each hexagon represents 20 miles (32.4 km).

Communist units of maneuver are Soviet divisions along with East European satellite and Mid-East nations’ corps and armies. On the US/UN/ATO side there are mostly divisions and a few corps, along with reinforcing US “regimental combat teams” and British “brigade groups.” Air power is abstracted, with counters and rules showing the effects of one side or the other gaining temporary air superiority. Each full turn represents one week of ‘real time’ from late July to the start of October.

Each well-played match usually has three stages. In the first, the Red Army juggernaut drives deep into the relatively small US/UN/NATO ground forces. Only the massive use of a-bombs by the US can stem the tide.

As Soviet losses mount and US prestige sinks, the middle stage begins. It’s characterized by both sides maneuvering their units, seeking to hold or take contestable key areas. Soviet airborne guards divisions are likely to make their appearance. A-bombs are still going off, but their targeting is more selective and there are fewer such attacks. During this period a well-planned Soviet campaign will achieve its victory objectives – the question is: can they hold onto them?

The end game sees an all-out UN counteroffensive. That player throws in everything he’s got to push back the Red Army from enough victory hexes to overturn what will otherwise be their end-of-play win on points.