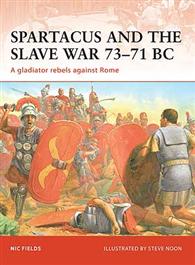 Spartacus and the Slave War 73-71 AD, A Gladiator Rebels Against Rome

In the year 73 BC, Spartacus broke out of a gladiatorial training school and formed an army of runaway slaves and people with little to lose. This army defeated two Roman armies and attacked several cities.Terrified lest the revolt spread, the government in Rome assigned Crassus and Pompey to crush to rebellion. They cornered Spartacus and brought him to battle near the source of the river Silarus. During the battle, Spartacus was killed and his army defeated. Crassus crucified 6,000 prisoners as an example to others who might think of revolt. Written by Nic Fields and illustrated by Steven Noon, this campaign title brings to life the story of Rome¹s most famous revolt and the ex-gladiator who led it.