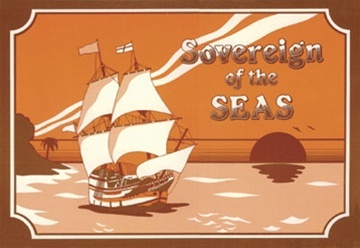 Sovereign of the Seas

Published in boxed form by Excalibre Games in 1979, this is a sea faring and trading game set in the late 17th and early 18th centuries. Two to six players compete for cargoes across a six-section, thick-stock, die-cut map board showing the entire world and its oceans. Also included is four-page rules folder, one payoff chart, two cargo charts, 32 port cards, 18 cargo cards, 36 destination cards, 20 pirate cards 20 weather cards, six ship markers (pawns), 12 port markers, two dice and 28 die-cut "gold coins." The game is won by the first player to get back to his home port with 150,000 or more in gold. This was possibly the first "Euro" style game ever published in the USA.