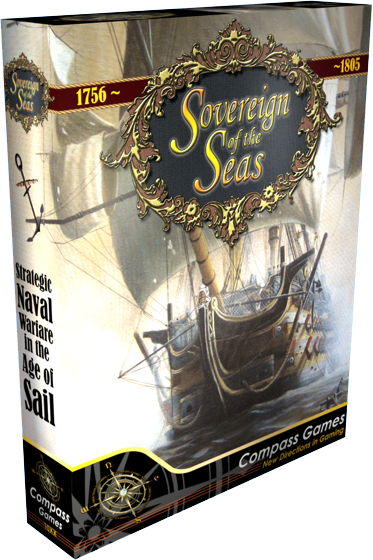 SOVEREIGN OF THE SEAS is an uncomplicated war game centered on the naval aspects of the series of wars between England and the various European powers between 1756 and 1805 for dominance of the world’s oceans.

The game depicts this conflict at a strategic level, with most operational and tactical details represented by fast and easy-to-play systems, rather than intricate mechanisms. The intent of the game is to provide a broad overview of the historical events while being fun to play. SOVEREIGN OF THE SEAS owes its original inspiration to the game concepts of WAR AT SEA published by The Avalon Hill Game Company, a game which covered the war in the Atlantic in World War Two. SOVEREIGN OF THE SEAS borrows a number of these concepts from this earlier game as a starting point, such as area movement, individual capital ships, individual leaders, battle line resolutions, and rolling sixes to hit, and then diverges significantly to reflect the sailing warship era situation.

The object of the game for the English player is to destroy the naval forces of the European Powers player and prevent them from obtaining control of vital sea areas around the world. The object of the game for the European Powers player is to escape the forces of the English player and obtain temporary sea control of vital areas to support the continental and colonial objectives of various European nations. The game uses over 650 counters, one full size map, and numerous organization cards and play aid sheets.

Sovereign Of The Seas Errata, 1Aug17

- 8.3 As stated at the start of the rule both players, not just the English player as indicated later, lose a point for each ship lost during the turn.

- Delete rule 6.233 in its entirety. I was trying to account for a minor event and should never have put it in at the last moment. Sorry.

- When returning to port, players should alternate returning squadrons to port in the same manner as when alternating movement during the turn.

- For Victory Point levels, the rules are correct and the flow chart in error, in that 50 VP or more is needed for a Major Victory.

- For Searching, the Avoid player uses three (3) dice as indicated in the rules, not one (1) as shown on the flow chart.

- On the map the first scenario flag for ownership of New Orleans was in error made Dutch when it should have been Frenh. Something about the colour bars going in the wrong direction and we missed it.