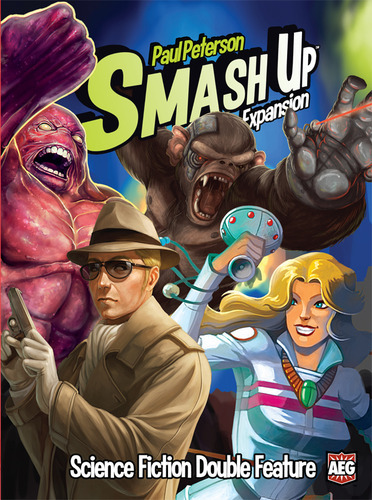 Smash Up is back with even more wild factions in the mix! Science Fiction Double Feature brings four new groups to the base-smashing business, with abilities unlike those seen before!

Time Travelers – The time stream has been compromised. Robots from the future mingle with pirates, extinct dinosaurs move with magical wizards… everything is all smashed up! That’s where the Time Patrol steps in. Organized in 1976 and led by the enigmatic Doctor When, the Time Patrol works to keep time flowing… in the manner they deem best.

Cyborg Apes – In a daring raid on a top secret research facility, apes stole the latest in cybernetic enhancements, and are now enacting their centuries old plan to take over the world! Combining their natural athleticism and powerful strength with high-tech augmentations, these apes will go bananas all of your opponents!

Super Spies – The shadow war between International Secret Intelligence and the evil HAVOC (Henchman and Villains of Chaos) continues. HAVOC’s schemes threaten the world, from weather changing satellites to lasers mounted on secret moon-bases, they can only be opposed by the daring agents of the ISI. Using the latest in espionage technology, the ISI will be able to foil your opponents plans before they even come to fruition.

Shapeshifters – Far below the surface of the earth, strange amorphous creatures have developed a thriving world, based on the manipulation of their own genetics. Now they plan to apply that knowledge to conquer our world above. Taking samples of the most powerful creatures and warriors they can find, these shapeshifters can use the best of whoever they copy.

Combine these groups into teams of two for various effects! Smash Up: Science Fiction Double Feature also contains 8 new Base cards to compete over.

Smash Up: Science Fiction Double Feature can be played on its own as a two-player game or combined with other Smash Up titles to allow for up to four players to compete at the same time.