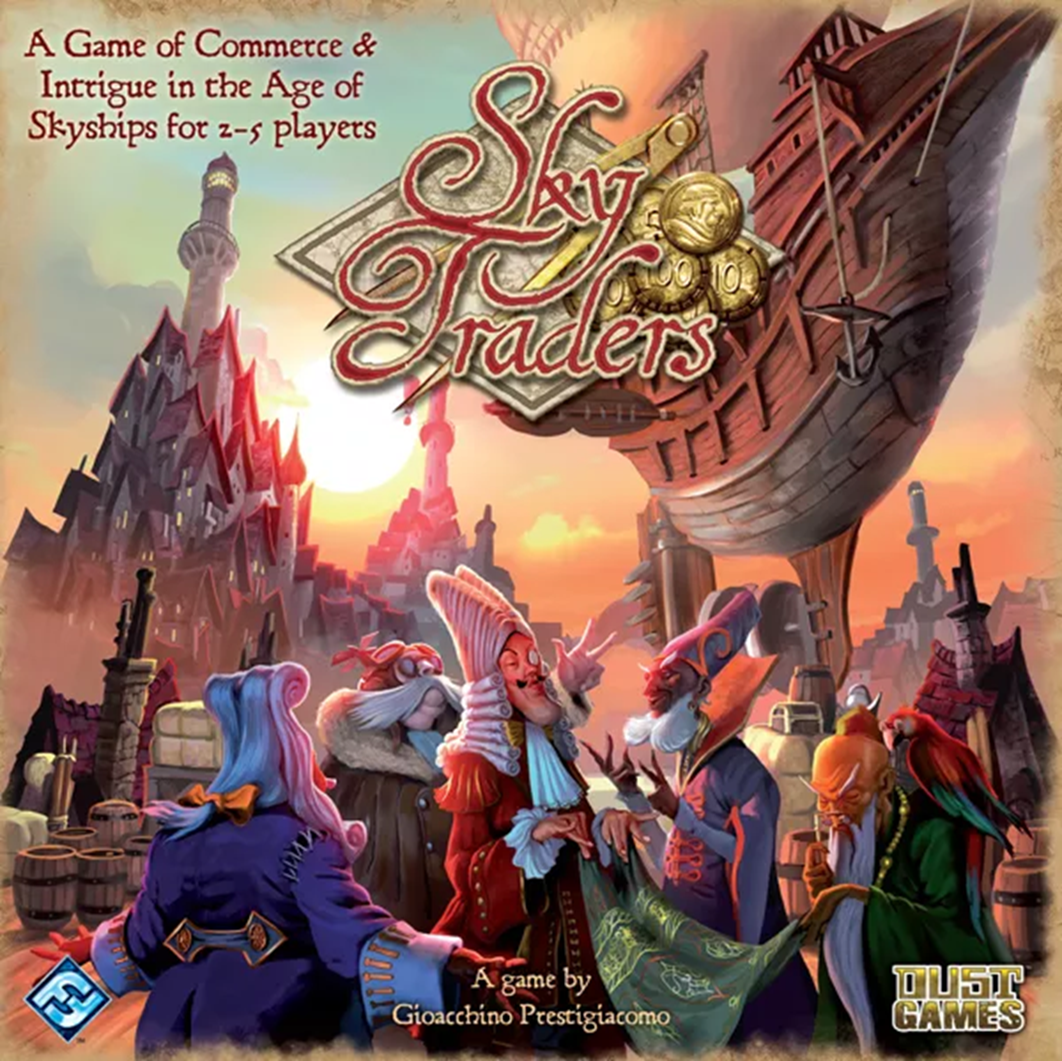 Command your own skyship and become a master merchant in Sky Traders, a board game of commerce and intrigue for two to five players. Evade the ruthless Wind Pirates as you collect influence with the powerful Sky Guild. Manipulate the commodity market using your powers of persuasion. Through clever trades and resourceful captaining, you can seize the title of Master of the Sky Guild!

Each round of Sky Traders takes place in two main phases. In the first phase, players sail their ships and perform actions. To start, each player draws an Ill Wind card, which has a variety of effects that can help or hinder players. The Sky Patrol could attack you for carrying contraband, or the Wind Pirates might try to board your vessel in hopes of plundering valuable goods. If you're lucky, you'll stumble upon a treasure map that leads to riches. It's all up to fate when you draw from the Ill Wind deck.

You'll add new members to your crew to gain various improvements. Skymen lend their blades to fight off Wind Pirate attacks. Other shipmates can help you earn more money when selling goods. Some crewmembers even make it possible to disregard the results of an Ill Wind card. You'll want to be judicious when hiring crew since they take up valuable space on the ship that could be used for trade goods.

If your skyship requires repairs or refueling, visit a city. While there, line the ship's cargo hold with valuable textiles, spices, or even jewels, then deliver the goods to another city where entrepreneurs will pay large sums of money for the items. Make sure to stock up on goods when the price is low and sell them off when their value increases.

In the second phase of each turn, the Guild Council takes place. During this round, players deliberate with each other in hopes of persuading their peers to help influence the price of goods. Strike a deal with your peers and you could force a surge in the value of the commodities you own, but if you've angered your rivals, they may choose to team up and devalue the wares you are selling.

At the end of the Guild Council phase, each captain also has the opportunity to purchase Influence, which increases his ability to control prices and moves him a step closer to victory. Influence is expensive, but you cannot become the Master of the Sky Guild without it.

As captain of your own skyship, you'll have to decide each turn how to best service your needs. Buying cargo at one port and delivering it to another city where the goods are highly desired is a great way to turn a profit. However, a captain also must consider hiring new crew, checking the ship’s phlogiston (fuel for skyships) levels, repairing damage sustained in pirate attacks, and undertaking other important tasks to keep the ship running at peak performance. When money is tight, haul toxic sludge or collect minerals from the countryside to make some quick money.