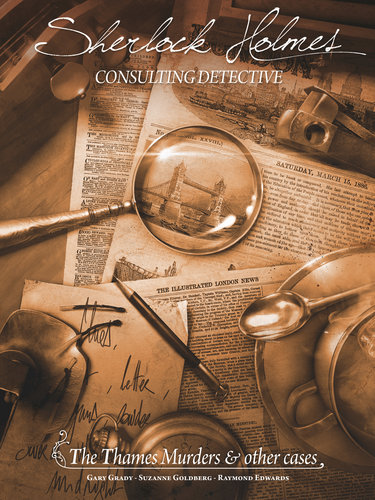 “What one man can invent another can discover.”

–Sherlock Holmes, The Adventure of the Dancing Men

t is the close of the nineteenth century. As pea soup fogs blanket London, mysterious figures meet in dark alleys, disreputable restaurants, and opium dens. Robberies, murders, forgeries, arson—every crime imaginable can be found in Victorian London, and though few have the skill to follow these invisible threads, they all trace inexorably back to one man: Professor James Moriarty, the Napoleon of crime. Yet Scotland Yard and the people of London are not helpless in this master criminal’s clutches. The people have their champion, the world’s only consulting detective: Sherlock Holmes.

Sherlock Holmes Consulting Detective is a cooperative game of observation, logic, and the science of deduction for one to eight players. You and your fellow players take on the roles of members of the Baker Street Irregulars, Holmes’s cadre of young agents, whom he employs to gather information in his cases. Armed with the facts of the case, the London Directory, a map of Victorian London, the daily issue of The Times, and your own wits, you must unravel ten devilishly complex cases, each with a unique casebook. If your mind is sharp and your logic unflawed, you may even outshine the great detective himself!

“It is a capital mistake to theorize before one has data. Insensibly one begins to twist facts to suit theories, instead of theories to suit facts.”

–Sherlock Holmes, A Scandal in Bohemia

At the beginning of a game of Sherlock Holmes Consulting Detective, you and your compatriots lay the map of London at the center of the table. Here, you’ll see Holmes’s London divided into five districts, each with dozens of locations representing the homes, parks, police stations, theaters, banks, museums, and countless other buildings that make up the city. In the course of your investigations, you will visit these places to gather clues—calling on Scotland Yard for the official reports, going closely over the scene of the crime, and visiting the assortment of ambassadors, innkeepers, waiters, gunsmiths, doctors, tobacconists, and others who may have information on your case.

You also have at your disposal a copy of the London Directory and the daily issue of The Times. The London Directory offers a list of London’s inhabitants and where they can be found, as well as lists of various categories, such as barristers, booksellers, hospitals, churches, or music halls that you can reference to narrow your possible targets. While the London Directory offers highly organized, but limited information, The Times has an assortment of specific information on a variety of subjects—if only you can suss out what parts of the paper actually pertain to your case. Do the results of a riflemen competition have any bearing on the murder of a munitions magnate? Does a fatal explosion in St. Petersburg or the arrival of a young Egyptian dancer have any connection to your current case? You must determine what is useful from the official news and learn the rest on the streets of London!

Your final asset in these cases is a list of your allies: those you can reliably go to for useful information. Porky Shinwell and Fred Porlock have valuable insight into the workings of London’s underworld, while Henry Ellis and Quintin Hogg are journalists who may well know a few more tidbits about information printed in the official news. Sir Jasper Meeks is the Head Coroner at St. Bartholomew’s Hospital, and he would certainly have autopsied any corpse discovered in an investigation, while others can offer clarity to the nuances of law, give you access to archived documents, or keep you up to date on London gossip. You may even turn to Sherlock Holmes himself for a bit of advice.

“I never guess. It is a shocking habit—destructive to the logical faculty.”

Once you’ve read through the initial facts of the case as presented to Holmes and Watson at 221B Baker Street, your investigation begins! Each turn, one player is the lead investigator, and after the group discusses their best options, that player decides where you will go in London to follow up on your initial leads. For instance, at the start of the case you may choose to head immediately to the scene of the crime, or you may visit the Head Coroner at St. Bart’s to find out more about the body of the deceased.

Every location in London has an address that can be found in the London Directory. Perhaps you wish to go to Simpson’s Restaurant to check a suspect’s alibi—simply look up the address in the Directory. Once you've found it, you’ll turn to the corresponding section in the casebook of your current investigation. The text you read determines what you find there, what observations you make, and the questions you ask. Once you’ve received this new influx of information, the next player becomes the lead investigator, and you and your friends begin making deductions and exploring new possibilities.

Ultimately, your goal is to explain the mysteries of the case to the satisfaction of all involved. At the end of the casebook are two sets of questions. The first group of questions pertains directly to the case, such as the culprit’s identity, motive, and the truth behind any loose ends. The second set of questions regards items that are only incidentally related to the case, but successfully answering these questions can further illuminate events and increase your final score. After you and your fellow investigators have decided on your answers to these questions, you may proceed to the solution, wherein Holmes discourses and explains the case in full, allowing you to see which aspects you correctly deduced and where you went wrong. Although it’s certainly difficult, you may even be able to solve the case by following fewer leads than Sherlock Holmes himself!

Crime Is Common. Logic Is Rare.

“You know a conjurer gets no credit when once he has explained his trick; and if I show you too much of my method of working, you will come to the conclusion that I am a very ordinary individual after all.”

–Sherlock Holmes, A Study in Scarlet

Enter the streets of Victorian London in Sherlock Holmes Consulting Detective, a game that will test your logic and reasoning to their fullest extent. Can you oppose the crimes orchestrated behind the scenes by Professor Moriarty? Follow your leads, exercise your logic, and solve ten of the most difficult cases to ever enter 221B Baker Street. The game is afoot!

Important note: The ten cases in The Thames Murders and Other Cases are the same ten cases released in the Ystari version of the game Sherlock Holmes Consulting Detective, now fully revised and retranslated. The solutions and contents of some cases have changed.