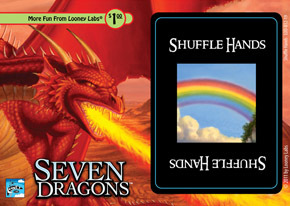 This is an Action that you can add in to your Seven Dragons deck.

When played, you gather up all players' hands, shuffle them, and deal them out among the players, starting with yourself. It has part of the rainbow dragon's image in the center, and when played to the top of the discard pile, it causes the Silver Dragon to act as a wild card.

This card was published in 2011 to promote the release of Seven Dragons. It is a card that peels off of a postcard. The play side of the card is shiny, due to the peel-off method, but this will not affect gameplay.