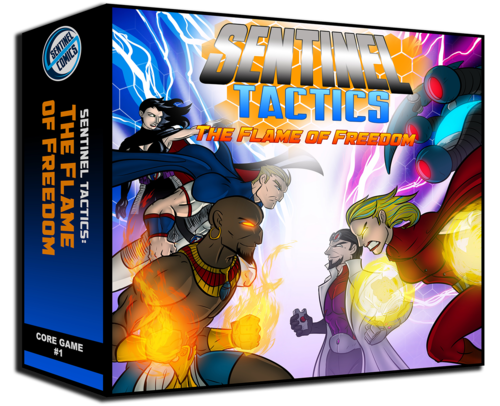 Sentinel Tactics: The Flame of Freedom is the hex-grid, dice-based combat game that puts you in control of the heroes and villains who meet in battle across the thrilling comic book pages of Sentinel Comics! Go head-to-head in skirmish play, or experience the stories by playing through the included Scenario Books!

The Flame of Freedom, which takes the players through the Freedom Five’s interactions with their long-lost ally, Ra, and includes the heroes Legacy, Bunker, Tachyon, The Wraith, Absolute Zero, and Ra, as well as the villains Baron Blade, Omnitron-V, and Citizen Dawn.

Sentinel Tactics: The Flame of Freedom comes with nine characters, three scenario books, and two map locations. Will you take the role of the stalwart heroes or the dastardly villains? The choice is yours in Sentinel Tactics!