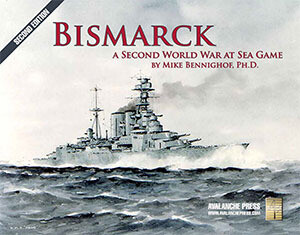 In May 1941, the newly-commissioned German battleship Bismarck set out for the North Atlantic in company with the cruiser Prinz Eugen on a commerce-raiding mission. She captured no merchant ships but sank a British battle cruiser and was herself destroyed in a hail of shells and torpedoes. For a brief moment she captured the world’s imagination, and now you can re-play her mission – and many others – in the second edition of Second World War at Sea: Bismarck.

Bismarck, the game, covers the famous hunt for Bismarck, the battleship, but also all of the other German commerce raids into the Atlantic between the fall of 1939 and the summer of 1941. The breakout of the battle cruisers Scharnhorst and Gneisenau is here, the raids of the cruisers Admiral Hipper and Scheer, and much more. Like all games in the series, this one is packed with scenarios.

Beyond those missions, we have those planned or discussed that weren’t attempted: the use of the German battleship Tirpitz, either alone or alongside her sister. German aircraft carriers. The U.S. Navy’s Central Atlantic Neutrality Patrol and its carriers, battleships and cruisers.

A little listening enjoyment while you consider a purchase: