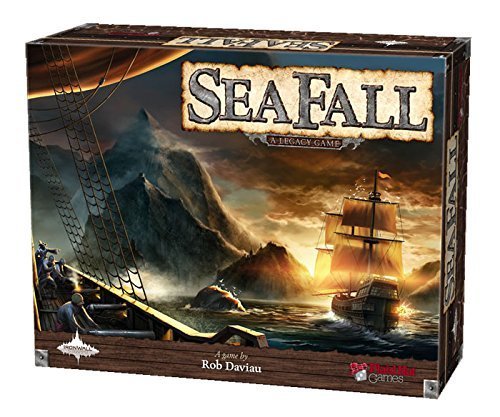 The world is emerging from a dark age where history and knowledge were lost. The great provinces have just begun re-establishing seafaring technology. Wealth and fame await leaders who are cunning and brave. Explore the coastal islands. Discover lost civilizations. Sail the open sea in search of new lands. Uncover long buried secrets. Sail until the sea falls off the edge of the world!

SeaFall is a 'Legacy' board game designed by board game industry veteran Rob Daviau. Like the players who play them, Legacy games 'remember' what happen from game to game. Player choices have irreversible impact on the game world as the game board changes, cards are modified and sealed packs are opened revealing twists and turns in an epic storyline.

SeaFall is the third Legacy game designed by Rob Daviau. It was preceded by Risk Legacy and Pandemic Legacy Season 1. Both were important and acclaimed games whose innovation and scope sent ripples through the board game community. Now, for the first time ever Rob has built a world and game from scratch around the Legacy idea.

In SeaFall, lead your province in a campaign to become the Emperor of your world. Each game, the first player to meet the glory target wins, and the player with the most campaign glory when the end of the world is discovered ascends to rule the land.

Since SeaFall is played in a long campaign, it is recommended that your playgroup stays as stable as possible, with you plus 2-4 friends experiencing the story and adventure together over 15 or so games. The game rules contain contingencies for when players occasionally need to miss a game, drop out or join in.

More information can be found on the publisher's website.