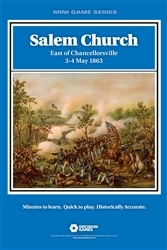 As the battle of Chancellorsville raged, a Union corps was dispatched to hit the vulnerable Confederate army from behind. The flanking column was delayed by a single Confederate brigade at Salem Church. The battle grew as Confederate arrived first to firm up the front, then to turn the tables on the Federals. The flankers became flanked, then had to fight for their lives.