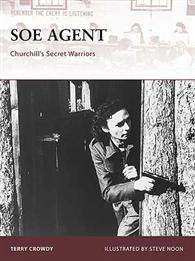 On average a Special Operations Executive (SOE) agent would be dead within three months of being parachuted into action. Terry Crowdy tells the extraordinary story of these agents, some of whom were women as young as 22, following them through their experiences beginning with their recruitment and their unorthodox training methods, which included hand-to-hand combat and parachuting. Packed with photographs and full-colour artwork, this book recounts the incredible combat missions of the SOE agents from their role in the attacks on a heavy water plant in Norway, to operations in the field with Yugoslav and Greek partisans, as well as sabotage missions ranging from blowing up bridges to the raising of full-scale partisan armies as they attempted to fulfill Churchill’s directive to set occupied Europe ablaze.