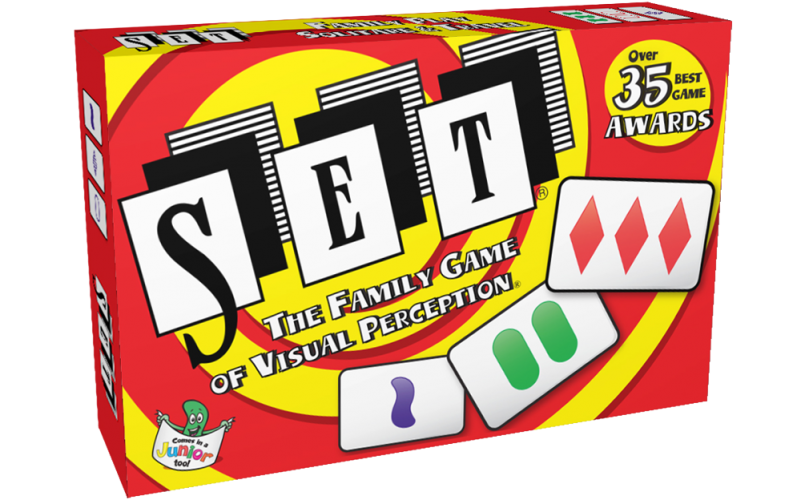 SET is one of the most awarded games of all time! Race to find as many SETs as you can—the player with the most SETs at the end of the game wins! Play SET solo or with as many people as you can fit around the table! It’s perfect for travel, parties or as a quick after-dinner game. Fast-moving and fun, SET is a perfect for any get-together with family and friends! It’s Triple Matching Mania that anybody can play, but nobody can stop!

SET, although made as a game of fun, has a ton of educational value. Teachers love SET and use it in classrooms around the world. SET is also a perfect game to help keep your brain active and healthy. Exercise your brain while playing a game!

What is a SET?

A SET is three cards where each feature, when looked at individually, is either all the same OR all different. Each card contains four features: color (red, purple or green), shape (oval, squiggle or diamond), number (one, two or three) and shading (solid, striped or outlined).

SET is a speed game. The first to see a SET, calls out "SET" and picks up the three cards that make the SET. There are no turns and no luck. Race to find as many SETs as fast as you can. Be the one who has the most SETs when the cards are gone, and you win! SET is a game of fast-thinking fun!

SET builds cognitive, logical and spatial reasoning skills as well as visual perception skills while playing a game! Because it has a rule of logic (three cards that are all the same or all different in each individual feature), and because players must apply this rule to the spatial array of patterns all at once, they must use both left brain and right brain thought processes. This fun game actually exercises your brain!