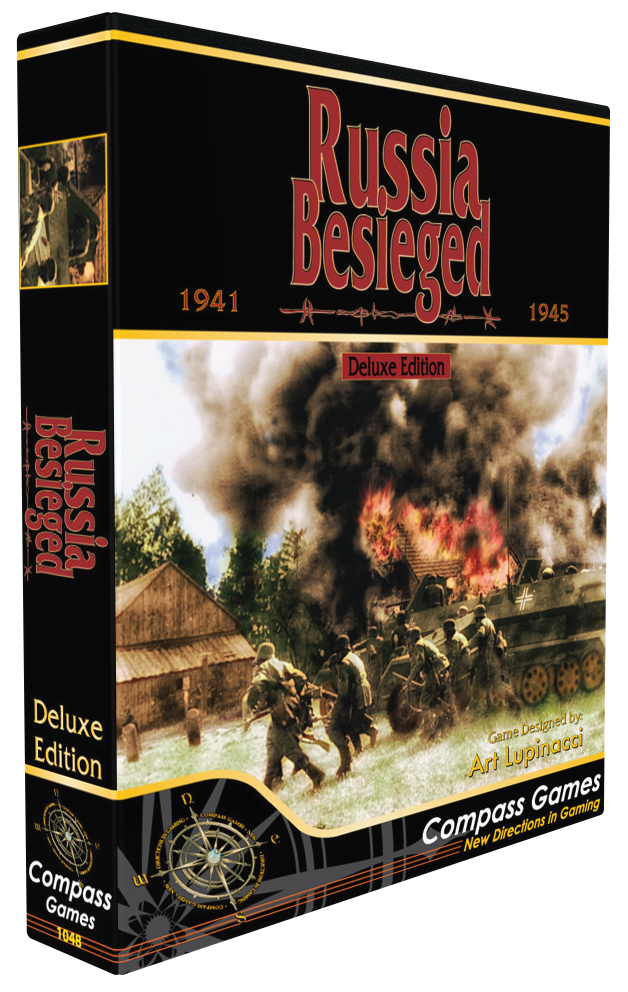 The time is June 22nd, 1941. Over 3 million German troops are poised on the Russian border preparing to launch Operation Barbarossa! What was supposed to be a quick campaign ended up marking the beginning of the end of Nazi Germany.

From Award Winning designer, Art Lupinacci, Russia Besieged covers the entire German campaign in the east from 1941 to the bitter end, in 1945. One of the finest Army/Corps level games on the market, Russia Besieged Deluxe edition has been overhauled from years of experience and nuances discovered in Tournament play, to bring you a richly detailed, east front experience you expect to see from this classic wargame.

Two large maps cover the territory from Berlin to Archangel to Astrakhan down to Bucharest, all to accommodate 5/8” counters! Rich in design features, the game simulates unit breakdowns, surrounded cities, Blitzkrieg attacks, a double impulse movement and attack system, two impulse turns, multi-weather turns and much, much more.

As the German player, you experience many of the challenges experienced by the German commanders on the Eastern Front. Do you channel your forces to Leningrad? Push for Moscow? Or go for the oil rich regions of the Caucasus Mountains? All a tough call as each looks attainable, if you only had another couple of units more on the map!

Early victories quickly change to difficult advances to the point where you make that fateful decision to go on the strategic withdrawal to fend off defeat. Or not! Sudden Death Victory conditions can be met at any time during the struggle.

As the Russian player, the first year of the war is a nail-biter! German troops pour deep into Russia as you husband your forces to blunt the most dangerous attacks, giving up ground grudgingly as you pray for the early onset of Winter. Snow brings respite and fresh forces. But, the relief is short lived as the warm weather of 1942 brings new challenges. A rejuvenated German Army, a shadow of the initial invasion force, is still a force to be reckoned with! Unable to attack everywhere, the German will marshal his panzers and push where he feels success will bring decisive victory. Can you stop him!

Russia Besieged is a multi-layered game experience that includes not only pushing counters on the map, players must also take into account their side’s War Economy. The Russian player must deal with production of troops and oil to rebuild depleted forces while the German is on a constant struggle with replacement points to rebuild a proper mix of units to defeat the Red Horde!

Can you do better than the historical counterparts? Play the game and challenge yourself!