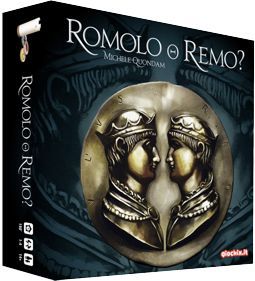 Around 753 B.C. in central Italy, many new villages populate the region of Latium. This fertile land could allow a strong city to establish control of the trade routes between the Etruscan cities of the North and the Greek colonies of the South.

The two grandsons of the King of Albalonga, the twins Romolo and Remo, descendants of Enea of Troy , want to rule. Each twin sees himself as King of a region that will bring power and fame. Acting against each other, both take their followers to create two cities near the river Tiber. Which one will succeede in building a city that controls the region? The twins are not alone in their struggle for dominance. The Kings of Antemnae and Crustumerium also seek ownership of this valley. Four will fight, but only one will rule. Who will previal to be come the King?

In Romolo o Remo, players act as Kings of the new cities in the Latium region, competing with each other to gain control of the whole region. Who will build the strongest city? Who will be the founder of a new civilization, or maybe an Empire?

App Tools: the Romolo o Remo Market App is available on Google Play. This App allows players to esily manage their markets during the game. This App can be used on either a smartphone or a tablet. Players can use the App instead of the classical board. Added bounus for using the App: sound effects and voices will help players to follow the action of their opponents.