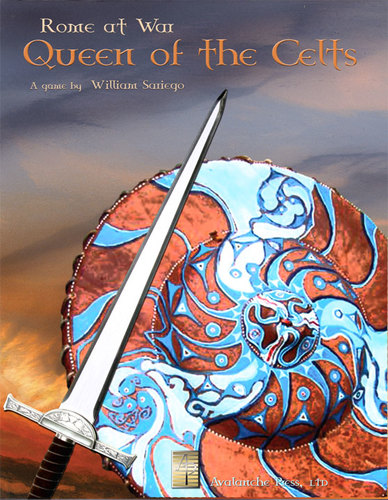 Rome at War: Queen of the Celts (Ding/Dent-Light)

In the year 43 AD, Roman legions splashed ashore in Kent, unopposed by the Britons led by Caractus, who had sworn to repel them. The Emperor Claudius had dispatched Aulus Plautius and 45,000 men to conquer the mist-covered island where Julius Caesar had failed almost a century earlier.

Over the next 40 years, Roman would clash with Celt in a series of battles that neither realized would determine the future of Western civilization. The Romans broke the Britons, whose furious courage could not match Roman discipline. The island would pass under Roman rule for the next several centuries, implanting a Latin-oriented culture and shoving Celtic ways to the very fringes of Europe. All that would remain were their legends; not least among them the fiery leadership of Boudicca, warrior-queen of the Iceni and resolute enemy of Rome.

Rome at War: Queen of the Celts is the third installment in the Rome at War series. Rome has outstanding heavy infantry, good light cavalry (provided by her allies) and even an elephant. The Britons depend on the fury of their Celtic charge, and also chariots and slingers. Plus they have Druids to help inspire them.

There are nine scenarios, or game situations, included in Queen of the Celts.