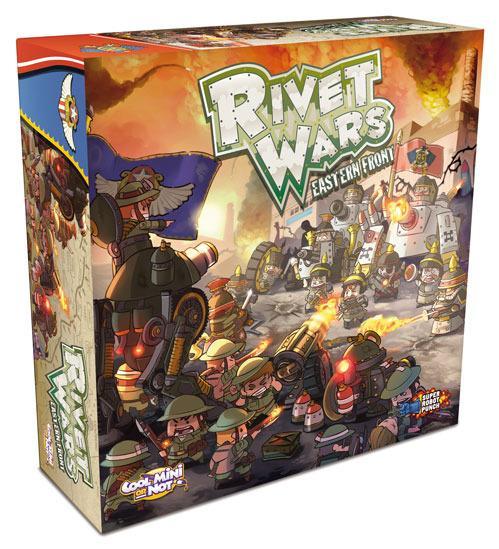 Rivet Wars is a miniatures boardgame that springs forth from the warped imagination of Ted Terranova – set on a world that never quite left World War I but with crazy technology like walking tanks, diesel powered armor, unicycled vehicles and armor plated cavalry!But don’t let the cute visuals fool you; it’s a world full of angst, war-torn camaraderie and dark humor. Heavily influenced by Ted’s experience working on RTS games like Rise of Nations, Rivet Wars features a unique turn-by-turn creation mechanic, allowing each player to respond to their opponent’s moves in real time, as well as craft deadly surprises, secret missions, and other tactical objectives to outthink and outwit their opponent!

There’s an ebb and flow on the tactical landscape and you can stock up surprises for your opponent to be unleashed even as he thinks he’s winning! Do you prefer a quick cavalry charge? Or crushing your opponent under the heavy treads of hulking tanks? Maybe you’re strategy is waves and waves of dedicated infantry? Whatever your battle-plan you’ll find a new home here in Rivet Wars!