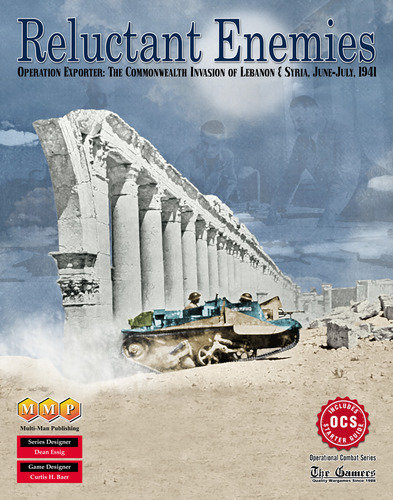 Reluctant Enemies (“RE”) is small game meant to serve as an accessible introduction to the Operational Combat Series (“OCS”). It is one map, with 60 or so combat units (both players) in action at any given time. This allows for a pace of play not possible with the previously published OCS monster games. Regardless of the reduction in scale it remains an OCS game with all features relevant to the system.

In this game there can be wide open, swirling, DAK-like battles in the desert with some limited armor forces, river lines to break, and very rough mountainous terrain to contend with. The British have an amphibious invasion. Naval shore bombardments by both sides can be important in the early part of the campaign and there is a small but significant air campaign. As always in the OCS, supply constraints make each player feel he may be on the edge of disaster.

Operation Exporter – Summary of the Campaign

Unfortunately, his campaign remains a footnote in WWII history even among many knowledgeable enthusiasts. However, given the nature of events in the Mediterranean Theater of Operations during the first half of 1941, this campaign was arguably the hot spot in the world at that moment in time.

General Wavell, senior military commander for the Commonwealth (here including Free French forces), certainly had his hands full after the entry of Rommel in Libya, the German invasions of Greece and Yugoslavia, and the fall of Crete at the hands of the Fallschirmjagers. His troubles were further compounded by the German support of an anti-British coup in Iraq. This German support was aided and abetted by General Dentz, the Commander-in-Chief of the “Army of the Levant’ and High Comissioner of the Levant in charge of the defense of the Vichy protectorate comprised of the French Mandate of Lebanon and Syria. The Vichy, ostensibly Britain’s ally just a year previous, saw fit to allow German air forces to transit through Rayak airfield in Lebanon on their way to Iraq. In addition, the Vichy sent hundreds of tons of armaments, munitions and other supplies to Iraq in support of the coup. All this was happening while Rommel was pressing against Wavell’s now depleted forces in the Western desert.

Nevertheless, Churchill demanded action. Wavell was compelled to find some available forces to deal with the threat to his rear and Operation Exporter was the result. Two brigades of Australian troops (21st and 25th), the 5th Indian brigade, and two brigades of Free French (1st and 2nd Brigades of the 1st Free French Division), along with some supporting troops, but very little armor or air support, were tasked with taking military control of all of Lebanon and Syria. De Gaulle contended that because of the involvement of his Free French, the Vichy French forces would not fight their “brothers in arms” and the operation would be a simple “walk over”. He was wrong.

The Vichy were well equipped and organized. They put up stiff opposition, and counterattacked with great effect. The Commonwealth and Free French forces, at first, were stopped cold. Ironically, it was the failure of Operation Battleaxe (June 15) in the Western desert that allowed reinforcements for this campaign from the Western Desert and a resumption of the Commonwealth offensive. After Damascus fell, Beirut was seriously threatened and with Indian 10th division troops (along with Habforce) moving on Aleppo and Homs to the North, the Vichy proposed an armistice to end the fighting.

The armistice was signed on July 14. However, this result was far from certain. Here you can examine why.