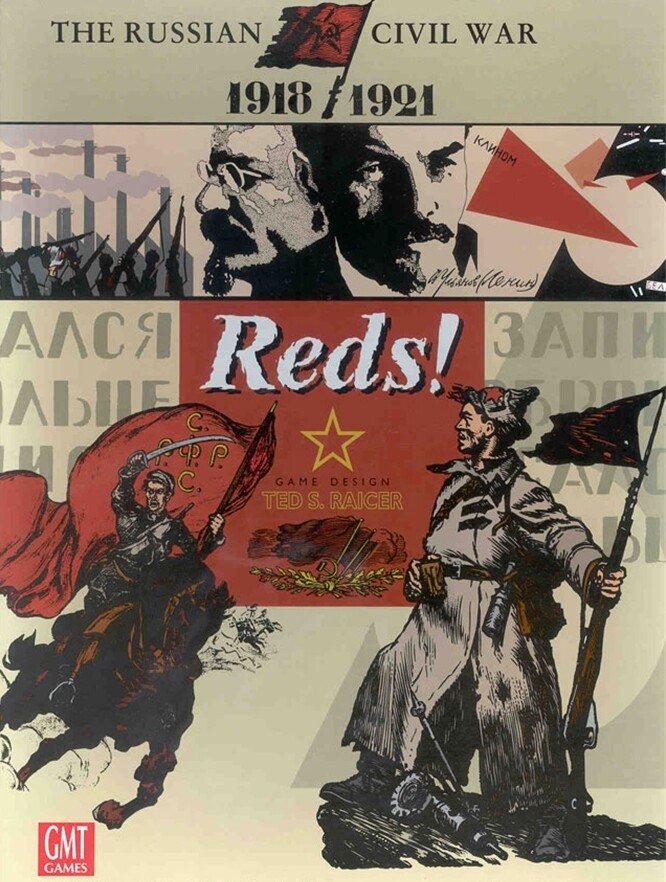 In the spring of 1917, the Tsarist autocracy of Nicholas II collapsed under the strains of the Great War (World War I). In the fall of that year, Lenin's Bolsheviks toppled the shaky Russian Provisional Government. White anti-Bolshevik forces were quickly routed, and Lenin soon declared resistance to the regime at an end. He was mistaken.

With western support, White forces began to gather in the Caucasus, in Siberia, and in the far north to oppose the Reds. The new Russian government also faced opposition from ethnic minorities who wished to break loose from the Empire and from other left-wing parties (not least, groups of well-armed Anarchists).

By August, 1918, the Reds, controlling the heartland of Russia, were threatened by enemies to the east, north, and south. Not until late 1919 would the tide turn decisively in their favor. But, in 1920, the Reds would face a new threat - an invasion by the armies of the newly independent Poland.

Reds! is a two-player wargame covering these dramatic events from August 1918 to the start of 1921, when the last organized opposition to Red rule outside the far east was destroyed.

The single large-hex map stretches from Warsaw in the west to Omsk in the east and from Murmansk in the north to Tashkent in the south. Across this vast expanse, players maneuver a colorful array of combat units representing various White factions, Anarchists, Nationalists, Allied Intervention Forces, the two divisions of the Czech Legion, and six Polish armies.

Units range from armies to brigades. The Red Order of Battle is built around 16 Red Armies organized by Leon Trotsky. There are also two powerful Red cavalry armies and the elite Latvian Rifle division. The White Order of Battle includes everything from Cossack cavalry corps to Moslem partisans and a German Free Corps. Each side also has support units: naval and river flotillas, air units, and, of course, the famous armored trains. Key leaders are also included: Frunze, Denikin, Wrangel, and Trotsky and his famous Red Train.

To model the chaos of this many-sided multi-front war, the sequence of play is based upon random chit pull which determines the order of activation of each White faction or six Red Army Front commands. The key Logistics phase, in which disrupted units are rallied and unsupplied units attritted, is also randomly determined. The game also includes TWO random event tables: one for each side.

From sweeping cavalry advances to slogging matches over major cities (such as Tsaritsyn - the future Stalingrad - known as the Red Verdun), Reds! is a true player's game. It is also a realistic depiction of some of the most titanic and unusual campaigns of modern history.