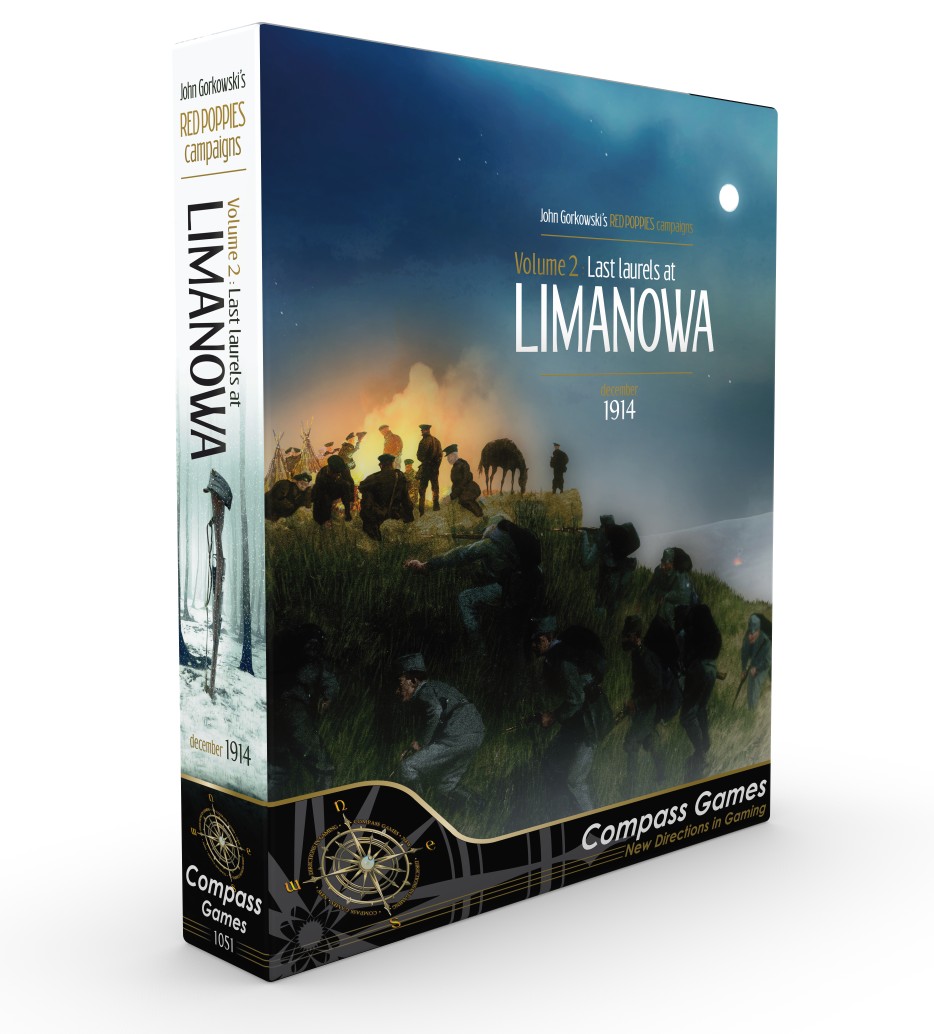 Red Poppies Campaigns: Volume 2 - Last Laurels at Limanowa (LLL), simulates Austria-Hungary's last independent victory against the Russian Empire in World War I.In November 1914, Russia's 3rd Army pressed on Krakow, the center of Austrian Poland, while the Russian 8th Army threatened to break through the Carpathian passes into Hungary.Desperate to relieve the pressure, Franz Conrad von Hötzendorf, Chief of the General Staff for Austria-Hungary, gambled on a counter attack about 25 miles southwest of Krakow.

Conrad launched his 4th Army into the thinly held, 20-mile wide gap between the Russian 3rd and 8th Armies on December 3.Austro-Hungarian forces rolled forward about 12 miles in just three days along a front from Lipanow in the north to Limanowa in the south.Russian resistance stiffened on the 6th with fierce fighting erupting around the village of Limanowa.Several days of see-saw action ensued until the lines crystallized on December 11.

For once, Conrad's daring paid off.In response to his gains, the Russians scrambled to secure their front and so abandoned plans to drive on Karkow and Hungary.Conrad, however, paid a heavy price by suffering 12,000 casualties and expending the last of his elite 14th "Innsbruck" infantry corps to stop the Russians who easily absorbed and replaced their 30,000 losses.Never again would the Austro-Hungarian Army win an independent victory; from now on, all progress depended on German participation.

LLL is the second volume in the Red Poppies Campaign (RPC) system for gaming World War I battles.Ownership of volume one, The Battles for Ypres, is NOT required to play LLL; everything you need to play LLL is in this box.LLL offers the same rules as The Battles for Ypres except that section 12, the Ypres scenarios and campaigns, is intentionally left blank while section 13, the Limanowa scenarios and campaigns, has been added.

LLL offers a map of the Limanowa battlefield scaled at 200 meters per hex.Game play proceeds in interactive turns representing 10 minutes of real time each as players maneuver opposing cavalry and infantry companies across a rugged rural landscape typical of the Carpathian foothills.