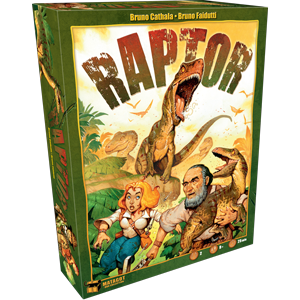 Hunt dangerous dinosaurs or fight for your family's survival in Raptor, an asymmetrical, two-player board game designed by Bruno Cathala and Bruno Faidutti. One player takes on the role of scientists, seeking to capture the baby dinosaurs running loose in the wild. The other player takes on the role of the mother Velociraptor, who will do anything possible to ensure that her children escape from the scientists. The scientists can use sleeping gas, fire, reinforcements, or their jeep to hem in and capture the raptors, while the mother raptor can frighten away or even kill the scientists, put out their fires, and guide her baby raptors to safety. In this easy-to-learn tactical board game of dinosaurs vs. humans, only the cleverest species is guaranteed to survive.

The game begins with the mother raptor occupying the middle of the board, her babies spread out in the surrounding area, and four scientists encroaching upon them from either side. You and your opponent both shuffle your cards and draw a hand of three. From that hand, you select one card to play and place it face down. Both players reveal their cards simultaneously.

If both players’ cards have the same numerical value, the cards are discarded, you refill your hand, and a new round begins. If you played the card with the lower number, you go first and perform the action indicated on the card. If your card had the higher number, however, you don’t perform your card’s action. Instead, you get a number of action points equal to the difference between the cards: if you played a card with a six and your opponent played a card showing a four, you then have two action points to spend however you want. Moving a scientist one space on the board costs an action point, as does capturing a raptor, attacking a scientist, or putting out a fire.

In every round, you must choose between the powerful actions offered by your cards and what you might accomplish with a few action points instead. You can play low-valued cards when you need to perform the action on the card far more than you need any action points. When you want action points more than anything, play the highest-valued cards.